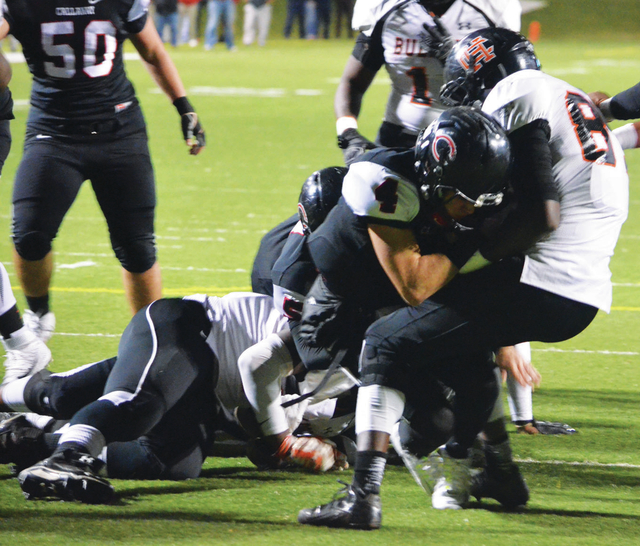 Callaway head coach Terry Hayes talks to his players during a game this season. Callaway will put its unbeaten region record on the line against Pepperell today. Kevin Eckleberry | Daily News

http://lagrangenews.com/wp-content/uploads/sites/37/2016/01/web1_CHS1.jpgCallaway head coach Terry Hayes talks to his players during a game this season. Callaway will put its unbeaten region record on the line against Pepperell today. Kevin Eckleberry | Daily News

Senior Dre Martin, who is a four-year starter, has led Callaway in scoring in its three region games. Kevin Eckleberry | Daily News

http://lagrangenews.com/wp-content/uploads/sites/37/2016/01/web1_CHS23.jpgSenior Dre Martin, who is a four-year starter, has led Callaway in scoring in its three region games. Kevin Eckleberry | Daily News

LAGRANGE – It’s time for the showdown.

The Callaway Cavaliers, who haven’t dropped a region game since the 2013-2014 season, will be put to the test tonight against a surging Pepperell team that is 4-0 in Region 5-AAA.

That Callaway team went on to run the table in the regular season before winning a second consecutive region tournament title.

Last season, the Cavaliers won all of their region games in the regular season and the tournament.

Overall, including the three region victories this season, the Cavaliers have won 20 consecutive region games, and they’ll try to make it 21 in a row tonight.

“It’s the same team back from last year except for one guy,” Hayes said. “They’re all seniors.”

The Dragons started the season with a 2-5 record, but they’ve won eight in a row since then.

“Our effort level has just gotten better and better and better in the last seven or eight games,” Pepperell head coach Skip Matherly said after his team rallied from a 10-point deficit to beat Coosa 70-62 last weekend.

One of Pepperell’s seniors is Austin Strickland, a 5-foot-11 guard who scored 19 points against Coosa, with 13 of those points coming in the fourth quarter.

Strickland is Pepperell’s top player, and Matherly said he has come on strong after a slow start to the season.

“We kept telling him to look at guys like Mark Teixeira,” Matherly said. “April and May, he’s hitting .190, by August they are flirting with .300 and 35 home runs. It’s going to come and in the last several ball games Austin has stepped up offensively.”

Hayes said his team will need to be prepared to lock down on Pepperell’s shooters.

“They are a perimeter-shooting team,” Hayes said. “They are a four-guard offense. They drive and shoot. They shoot a lot of threes. They press a lot.”

The rematch was a much more competitive game, with Callaway hanging on for a 74-68 victory.

The Cavaliers trailed 37-36 at the half, and they outscored the Dragons 22-14 in the third quarter to take control.

Pepperell hung tough in the fourth qurater, but Callaway prevailed.

“Last year, they were very upset that we beat them,” Hayes said. “It’ll be a showdown. We’ll see who the better team is. We’ll see tomorrow night.”

Callaway was tested in its region opener this season, an 84-76 win over Central-Carroll.

In its past two region games, Callaway overwhelmed Cedartown 66-33 and Haralson County 75-23.

The Cavaliers had to replace some talented seniors from last season’s team, including Quadarius Patillo, who is now playing college basketball, as well as Terry Godwin, who had a stellar freshman year on the Georgia football team.

The Cavaliers are still a veteran team, though.

Senior Dre Martin, the region’s player of the year last season, is a four-year starter, and he has led the Cavaliers in scoring in all three of the region games.

Senior Ernest Patillo, who along with Martin was an all-region player last season, provides another veteran presence, and he had 26 points in a road win over Harris County.

Junior Braylon Sanders, who started and excelled as a freshman when Callaway reached the final four of the state tournament, is having another big season after earning an all-region nod last year.

Sanders showed how explosive he can be in last weekend’s win over Cedartown when he made five 3-pointers in the first half.

Senior post player Joe Brown and senior guard Quantrez Cooper round out the starting lineup, and they all bring plenty of experience to the court.

Where the Cavaliers are lacking in experience is on the bench, but those players have been able to get a bunch of playing time.

In each game, whether it was a blowout or not, Hayes has made sure to get his bench players a lot of time on the floor.

“Against Haralson County, I think (the reserves) did a good job,” Hayes said.

Sophomores D.Q. Wilkerson, Courtney Williams and Kedrick Ramsey have each done some good things off the bench, as has senior J.T. Wortham.

“Milton Turner got some good playing time and showed some flashes, took the ball to the goal and rebounded well,” Hayes said.

If everything comes together, the Cavaliers hope to win a fourth consecutive region tournament title, and perhaps make another run at a state title.

Over the past three seasons, Callaway has reached the state quarterfinals twice, and the final four once.

For the seniors, winning a state championship would obviously be a fantastic way to say goodbye to high-school basketball.

Martin has been a part of a lot of great moments in basketball and football, but the one thing he hasn’t done is win a state title, and he’d like to change that.