LaGrange looks to slow down Shaw 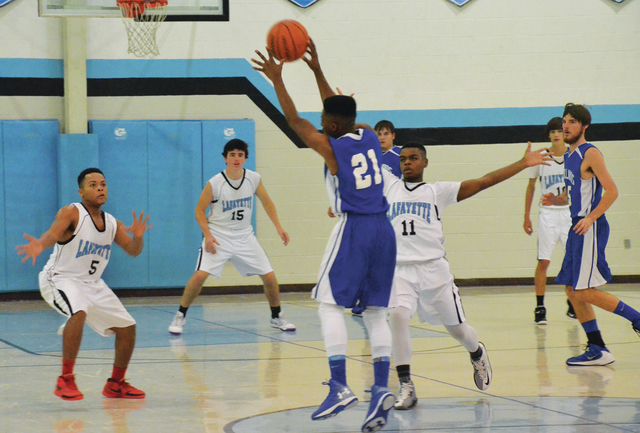 The Troup Lady Tigers will look to break through for their first region win of the season today. Kevin Eckleberry | Daily News

http://lagrangenews.com/wp-content/uploads/sites/37/2016/01/web1_troup6.jpgThe Troup Lady Tigers will look to break through for their first region win of the season today. Kevin Eckleberry | Daily News

The Lafayette Christian School Cougars will put their 9-0 record on the line today against Heirway Christian. Kevin Eckleberry | Daily News

Last weekend, the LaGrange Grangers went on the road to face the Carver Tigers in a Region 1-AAAAA showdown, and despite a furious fourth-quarter comeback, they lost 81-78.

Today, LaGrange will face another one of the region’s elite teams, the Shaw Raiders.

The game will be a part of a busy weekend on the local basketball scene, with all of the teams looking to bolster their positions in their respective regions.

The Grangers won their first two region games against Hardaway and Columbus before falling to Carver.

LaGrange faced a double-digit deficit in the fourth quarter against Carver, but it rallied and got as close as two points before coming up short.

Senior guard Derieko Smith continued to put up big numbers with a 22-point night, but it wasn’t enough.

Shaw, meanwhile, has been rolling this season.

The Raiders opened their region schedule with an impressive 83-68 win over Northside, and they beat Columbus 78-63 before getting past Carver.

Shaw built a 62-55 lead through three periods, and it held off a Carver charge in the fourth quarter.

The Raiders, who only won eight games last season, are led by seniors Kourtney Shakespeare, Devan Porter-Wilson and Cam Paulding.

Shakespeare and Porter-Wilson are the Raiders’ two leading scorers, and the 6-foot-6 Paulding provides a formidable inside presence.

Shaw head coach Terry White said the players have been committed since Day 1 to making the most out of this season.

The Grangers came into this season with high expectations after winning a region championship and making it to the final eight of the Class AAAAA state tournament last year.

All three of those players were instrumental in the success of last year’s team and have helped the team enjoy a terrific 2015-2016 season.

Also today, the LaGrange Lady Grangers (6-6 overall) will look to improve on their 1-2 Region 1-AAAAA record.

After opening region play with a home win over Hardaway, LaGrange faced a daunting task with back-to-back road games against Columbus and Carver last weekend.

The Lady Grangers lost both games, and they’ll have a chance to even their region record with a home win over Shaw today.

Shaw (3-12 overall) has struggled to an 0-4 start in region play, and it has dropped six straight games overall.

On Saturday, LaGrange’s teams will step out of the region to host Harris County.

Also today, Troup’s teams will look to break through for their first region wins of the season.

The Lady Tigers have been competitive in each of their three region games, but they’ve been unable to get into the winner’s column.

After losing to Sandy Creek and Woodward Academy by a combined seven points, Troup fell to Whitewater 50-39 on Tuesday.

The Lady Tigers (6-8 overall) managed just one point in the first quarter of Tuesday’s game, but they fought back and made a game of it, but they were unable to overcome the 13-1 first-quarter deficit.

Troup’s boys’ team is also looking to turn things around after an 0-3 start in region play.

Fayette County (6-7 overall) is also 0-3 in the region, so something will have to give today.

At Callaway today, the Lady Cavaliers (4-7 overall) will look to bounce back from their first Region 5-AAA loss of the season when they host Pepperell.

Callaway is 2-1 in the region after beating Central-Carroll and Cedartown and losing to Haralson County on Tuesday.

It’ll be a tough game for the Lady Cavaliers.

In today’s boys’ game, it’ll be a matchup of two teams with unbeaten region records.

The Cavaliers are 3-0 in the region, while Pepperell is 4-0.

Solid Rock and Bethlehem Christian are two of the top teams in GISA Region 1-AA, so beating both of those teams in the same week would be big for LaGrange Academy.

The LaGrange Academy girls’ team will be looking to bounce back from Tuesday’s loss to Solid Rock.

The Lafayette Christian School Cougars will face a major road test today when they play Heirway Christian in a region game.

The Cougars are 9-0, and one of their victories came in overtime against Heirway Christian on Dec. 8.

Marcus Mobley scored 24 points and had 16 rebounds in a 59-56 overtime win in a game that was played in LaGrange.

The Cougars trailed by seven points in the third quarter before rallying to tie it at 50-50 at the close of regulation, and they won it in overtime.

In today’s girls’ game, Lafayette Christian will also be looking for a second win over Heirway.