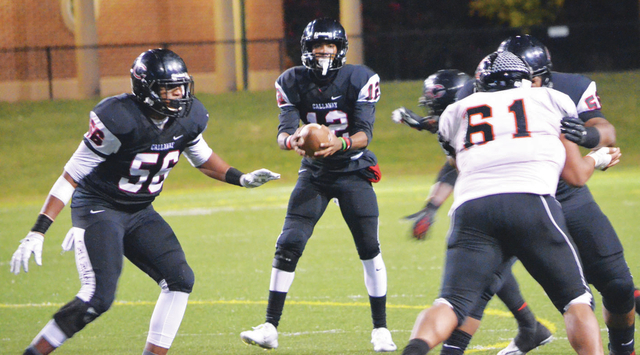 HOGANSVILLE – The Callaway Cavaliers were up to the challenge.

Facing a red-hot Pepperell team in a Region 5-AAA showdown, Callaway rolled to a 76-54 victory on its home floor Friday night.

The Cavaliers (9-3 overall) improved to 4-0 in the region, and they’re looking every bit like a team capable of winning a fourth consecutive region championship.

The Cavaliers exploded out of the starting gate, soaring to a 31-9 lead after the first quarter.

Joe Brown had eight points in that decisive opening quarter, and Dre Martin and Braylon Sanders each scored six points in the first eight minutes.

Callaway head coach Terry Hayes said the game plan was to turn up the defensive pressure early and see how Pepperell responded.

“We said we were going to press them every time, and see how they handle it,” Hayes said.

The Dragons had no answer for Callaway’s pressure, with numerous turnovers leading to baskets on the other end.

“We got steals, got easy baskets,” Hayes said.

Brown finished with 19 points, and he was one of four Callaway players in double figures in points.

Pepperell’s leading scorer, senior Austin Strickland, scored 14 points and made four 3-pointers, but he only had three points in the first half.

Hayes said a lot of the defensive focus was on slowing Strickland, and he said senior guard Quantrez Cooper did a terrific job guarding him.

“Cooper did a heck of a job on him,” Hayes said.

In Friday’s girls’ game, Callaway came away with a big win over Pepperell to improve to 3-1 in the region.

The Lady Cavaliers trailed by a point after the third quarter, but they controlled things in the fourth period to win 59-52.

“We went to the fourth quarter, and I said this is our time,” Callaway head coach Deyano Martin said.

Tanesha Johnson and Ki Ki Owens combined for 16 points in the final quarter.

Pepperell’s Madison Wilder led all scorers with 27 points, but she was limited to seven points in the second half.

“She was having to work on both ends,” Martin said of Wilder. “I think she ran out of gas. But she’s a heck of a player.”

Chyna Cameron had a huge day inside for Callaway with 15 points, and Martin said she had nearly 20 rebounds.

Callaway’s teams will be on the road against Rockmart on Tuesday.