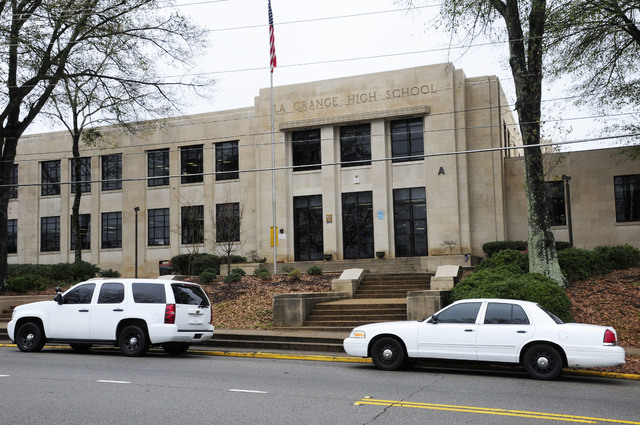 LaGrange police cars sit in front of LaGrange High School on Friday. Security at the school was increased with metal detectors and police presence after a student was found to have a loaded gun at the school Thursday.

http://lagrangenews.com/wp-content/uploads/sites/37/2016/01/web1_web0117LHScopCars.jpgLaGrange police cars sit in front of LaGrange High School on Friday. Security at the school was increased with metal detectors and police presence after a student was found to have a loaded gun at the school Thursday.

LaGRANGE — LaGrange High School remained on high alert Friday, one day after the school was placed on lockdown when a student was discovered with a loaded revolver on campus.

Students were greeted by metal detectors and an increased presence of LaGrange police officers, plus administrators from the central school office Friday morning, according to Yolanda Stephen, public relations director with the Troup County School System.

Superintendent Cole Pugh was checking students’ IDs at the front door and metal detectors were active at the entrance to the cafeteria and library, students reported. Students and classes were searched throughout the day, according to some students at the school, but at least two students felt that the searches weren’t carried out fairly.

The two students said administrators were not searching AP or honors classrooms, while students in regular classrooms were searched.

“They’re (administrators) making themselves look bad,” one student, who wished to remain anonymous, told the Daily News. “They’re picking out certain classes and searching certain people. Everyone is going through the metal detectors, but it seems like they’re targeting certain students.”

“An AP class, as well as other classes, was randomly searched today as part of the heightened safety measures,” she wrote via email. “Each school has its own safety plan and we take appropriate measures based on the needs of the school. Our safety focus continues to remain on all students and staff. We will keep the measures in place at LaGrange High as long as necessary.”

At least one other student was taken into custody on Friday, stated LaGrange Police Sgt. William Nelson with the Criminal Investigation Section.

Both Nelson and LaGrange Police Lt. Dale Strickland said the arrest was not related to the incident Thursday.

In the Thursday incident, school administrators were originally investigating after a student reported being threatened by other students, according to school and police officials. During the investigation, they found a 16 year old with the weapon. Strickland said the gun was loaded at the time it was confiscated.

Strickland said the student was taken to an area youth detention center.

Some parents are still upset at the way school administrators handled the situation.

One woman, whose daughter attends LaGrange High, emailed the Daily News and said she first learned about the lockdown through social media.

“When I see on Facebook ‘What is happening at LHS?’ I immediately go in to a nervous, panic state,” wrote Angela Stuckey. “I get a text from my daughter that says, ‘I don’t know what is happening. I’m in a corner told to be quiet and still.’ As any parent would, I literally feel my stomach come out of my mouth. I am helpless. I can’t do anything but sit and wait.”

Stucky said after learning her daughter was okay and the lockdown was lifted she was angry to learn administrators told students to not contact their parents.

“What about the parents or kids that don’t have phones? They don’t know anything, they can’t text their kids,” she wrote. “… Please tell me why a robo-call couldn’t have been sent out stating something like ‘Lagrange High is currently on lockdown, please do not come to the school at this time as the situation is being handled, we will send another call when the lockdown is lifted.’ What is so hard about that?

“My daughter should never be told when and where she can use her phone if she feels the least bit threatened in any way,” Stucky added.

Her daughter was at LaGrange High School during the incident. She said she understood why administrators and teachers asked students not to contact their parents at that time.

“Apparently that was not enforced schoolwide, as there were quite a few students who did text their parents. However, I would understand if the students were not allowed to be on their phones,” Lewis wrote in an email. “Suppose a student who knew about the gun texted or called the suspect with the gun to warn them that police were coming? That could have set the suspect off, and no telling what he could have done with the gun.”

Overall, Lewis felt the staff did a good job handling the situation at the time.

“I am a very over-protective parent, and of course I want to know that my child is safe at all times,” she said. “However, I also understand that in situations such as these, certain steps have to be followed. School staff and administration have trained and have policies and procedures in place for these type issues.”

Stucky said a printed letter from school administrators was sent home with her daughter. But she remains concerned about the incident.

“You take the time to type and print a letter, but won’t send out a robo-call alerting parents? I am beyond frustrated with ‘how well the administration handled this.’ I can’t believe anyone would even think this was handled correctly,” she stated.

John Radcliffe, assistant superintendent of maintenance and operations, told the Daily News via email Thursday that the school has “two walk-through metal detectors and multiple hand-held screening devices that are used upon reasonable suspicion.”

Responding to criticism of not issuing automated phone calls to parents, he said, “Yes, notifying parents via One Call Now is a practical solution that we will use going forward to notify parents after situations are diffused.”