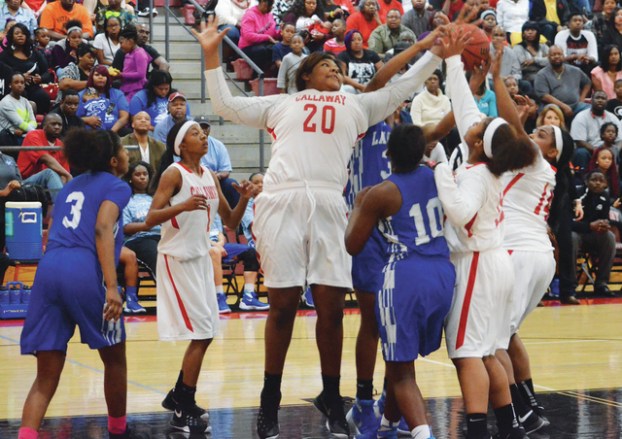 Late charge not enough for LaGrange

LaGrange’s Shania Woodard gets a shot away during Friday’s game against Shaw. Woodard scored 31 points in the win. Kevin Eckleberry | Daily News

http://lagrangenews.com/wp-content/uploads/sites/37/2016/01/web1_LHS18.jpgLaGrange’s Shania Woodard gets a shot away during Friday’s game against Shaw. Woodard scored 31 points in the win. Kevin Eckleberry | Daily News

LAGRANGE – A late offensive surge got the LaGrange Lady Grangers back into the game, but they were unable to complete the comeback against Harris County.

The Lady Grangers scored 17 points in a span of less than four minutes, but it was the visiting Lady Tigers holding on for a 57-52 win in the Region 1-AAAAA game on Saturday.

LaGrange was looking to complete a perfect weekend.

On Friday, spurred by Shania Woodard’s 31-point outburst, LaGrange beat Shaw 69-64, but it was unable to make it two in a row a day later.

LaGrange (7-7 overall) fell to 2-3 in region play heading into Tuesday’s game at Northside.

LaGrange had a one-point lead late in the third quarter of Saturday’s game, but Harris County went on a 6-0 run to carry a 37-32 lead into the final period.

After scoring 12 points in each of the first two periods, the Lady Grangers were held to eight points in the third quarter.

“We got a little impatient in the third quarter. The third quarter killed us,” LaGrange coach Jan Fendley said. “We didn’t score. And then they got transition points. We just have to fix that.”

Harris County carried that momentum into the final period, and it had a 46-35 lead with less than four minutes to play.

Sophomore guard Chnairiea Strozier made two free throws with 3:30 remaining, and LaGrange was within nine.

Moments later, following a Harris County turnover, LaGrange was down by six after Strozier made a 3-pointer.

After Harris County went back up by nine, Strozier drained another 3-pointer, and it was a 50-44 game with 2:30 left to play.

Harris County scored to push the lead to eight, and with two minutes remaining, Aryan Dozier’s 3-pointer made it a 52-47 game.

Then with 44 seconds left, Dozier knocked down another 3-pointer, and Harris County’s lead was 54-52.

The Lady Grangers got the ball back with less than 20 seconds remaining only down by three, but a potential game-tying 3-pointer went awry, and the Lady Tigers made two free throws to put it away.

Dozier led LaGrange with 21 points, and she scored 11 points in the fourth quarter and made three 3-pointers.

Woodard, a day after her big game against Shaw, had 16 points, and Strozier added 13 points, and she had nine points in the final period.

LaGrange was playing without starter Erica Daniel, who was out with an injury.

“We’re minus Erica,” Fendley said. “She got hurt (against Shaw). She twisted her ankle. So we were minus a starter, and she’s a senior so she’s a leader.”

Against Shaw, it was the Woodard show.

She scored at least six points in every quarter on the way to her 31-point outburst, with 12 of those points coming in the third quarter.

Warriors get another big win at home