Troup looking to defend its title 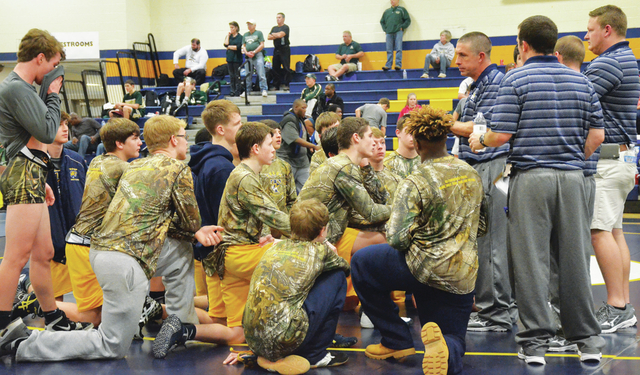 The Troup High wrestling team will host the county championship on Wednesday. Callaway and LaGrange will be the other two participants. Kevin Eckleberry | Daily News

http://lagrangenews.com/wp-content/uploads/sites/37/2016/01/web1_troup-wrestle.jpgThe Troup High wrestling team will host the county championship on Wednesday. Callaway and LaGrange will be the other two participants. Kevin Eckleberry | Daily News

A year ago, the Troup Tigers steamrolled the LaGrange Grangers 50-18 to win the county wrestling championship.

On Wednesday, those two teams will meet again with the county title on the line.

Troup is hosting the county championship, with the action set to get under way at 5:30 p.m.

In the first match, Troup will take on Callaway, and the second match will pit LaGrange against Callaway.

In the day’s final match, it will be LaGrange taking on Troup.

Also on Wednesday, the teams from Callaway Middle School, Gardner Newman and Long Cane will compete for the county middle-school championship.

It will be Troup’s first competition since it finished third in the Area 5-AAAA duals on Jan. 9.

Since then, the team has spent plenty of time in the wrestling room practicing, and Garner said that has been beneficial.

“I was very worried as far as the attitudes and the demeanor of the team after getting beat out (at the area duals), and what kind of practices we were going to have, but we ended up having some really good practices,” Troup head coach Craig Garner said. “The attitudes were good. I feel like we’ll be ready.”

Troup should also benefit from the return of some wrestlers who were previously unavailable because of injuries.

One of those wrestlers who has missed a lot of time this season is senior Hunter Wood, who has been out since late January because of an elbow injury.

Wood is one of two seniors who will be honored during the senior-day ceremony on Wednesday at 5 p.m.

The other senior is Hudson Newton, who was a state placer as a junior.

Having only two seniors is a positive thing for the future of the program, but Garner said there is a down side to that as well.

“It’s good, but also it can be a curse at times,” Garner said. “When you need a little senior leadership, you don’t have it. But it’s nice to know that we’ve got everybody returning but two.”

A year ago, Troup ran away with the county championship, and many of the wrestlers who helped win that title are back, including Wood and Newton.

LaGrange comes into the county championship after posting a 1-2 record in the Class AAAAA state duals last week.

LaGrange finished second in the area duals to advance to the state duals in Macon.

Callaway, meanwhile, wrestled against Columbus High last week and came away with a 42-36 win on senior night.