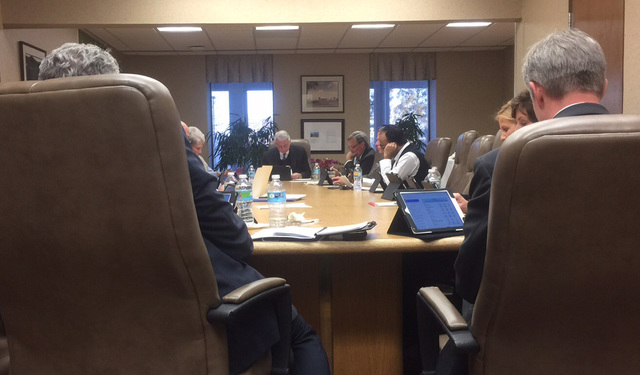 The West Georgia Medical Center board of trustees meets Monday afternoon at the hospital on Vernon Road.

LaGRANGE — The acquisition of West Georgia Health by Marietta-based WellStar Health System could be complete by the end of March, according to WGH President and CEO Jerry Fulks.

The boards of WGH and WellStar approved the partnership in November after months of negotiations. Final approval must come from the state Attorney General’s office following a public hearing set for Wednesday.

“We are anticipating the transaction will be prepared to close no later than the last of March,” Fulks told WGH board members at a meeting Monday. “There’s an outside chance it could be moved up, but that depends on a lot of factors coming in line.”

The move comes after WGH sought to align itself with a larger parent organization as part of a plan for greater financial security. WellStar, one of Georgia’s largest health care systems, is a $2 billion nonprofit company and operates five other hospitals serving 1.4 million people in the metro-Atlanta area.

At Wednesday’s public hearing, which is set for 5 p.m. at the Enoch Callaway Cancer Clinic auditorium on WGH’s main campus, WGH officials will present testimony supporting their request to hand control of their organization to WellStar.

If approved, WellStar would become the governing organization overseeing the big-picture operations of WGH, while WGH’s existing board would largely remain in place and conduct the day-t0-day operations of the hospital.

The partnership includes an exchange of board members between the board that governs WGH locally and the WellStar board. Two appointees from WGH will sit on WellStar’s board to represent WGH’s interests and two WellStar board members will be added to WGH’s local board.

WellStar has pledged $84 million in capital improvements to WGH if state regulators approve the acquisition. Within the first two years, WellStar officials have said they would spend $30 million on capital improvements. Fulks has previously said that could be used to fund the overhaul of the hospital’s cancer clinic. Additional work is slated to renovate to the hospital’s pharmacy and laboratory.

A $46.6 million taxpayer-backed bond approved by the Troup County Board of Commissioners in 2008 to partially fund the construction of WGH’s new south tower is also expected to be absorbed by WellStar if state regulators approve the partnership deal. WGH is currently up-to-date on its bond payments and has 123 days cash on hand — more than double the 60-day requirement under the bond agreement, according to Paul Perotti, chief financial officer of WGH.

WellStar’s president and CEO, Candice Saunders, is also slated to visit LaGrange on Feb. 15 and 16. She’s expected to address the LaGrange-Troup County Chamber of Commerce at their monthly Early Bird Breakfast on Feb. 16 and meet local elected officials, Fulks said.

“Her desire is … to come in and meet as many people as she can,” Fulks said. “We’re still working out the details of that itinerary.”

As the third largest employer in Troup County, about 1,400 people work for WGH, according to the Troup County government’s latest Comprehensive Annual Financial Report.

Note: This article had been amended to correct the spelling of a name.