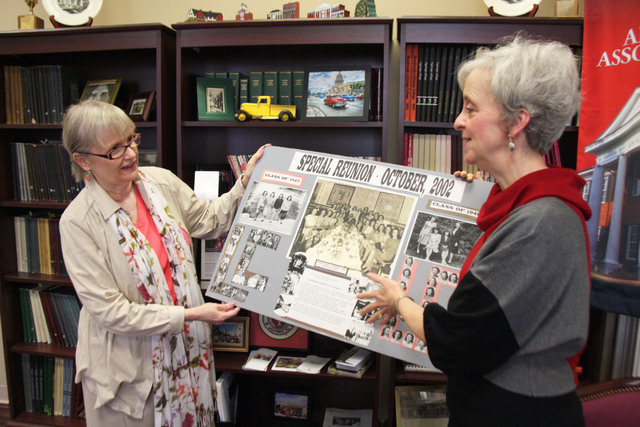 Martha Pirkle, right, director of alumni and community relations at LaGrange College, shows Amanda Plumlee a poster put together by the class of 1947 to commemorate its senior trip to Cuba. Plumlee, chair of Latin American studies and modern languages, will present a 3D Journeys lecture on the literature of Cuba 10 a.m. Monday in the Dickson Assembly Room.

http://lagrangenews.com/wp-content/uploads/sites/37/2016/01/web1_web0124Plumlee.jpgMartha Pirkle, right, director of alumni and community relations at LaGrange College, shows Amanda Plumlee a poster put together by the class of 1947 to commemorate its senior trip to Cuba. Plumlee, chair of Latin American studies and modern languages, will present a 3D Journeys lecture on the literature of Cuba 10 a.m. Monday in the Dickson Assembly Room.

LaGRANGE — LaGrange College’s Class of 1947 made headlines when it took its senior class trip to Cuba, the first in the history of the college to leave the United States for its annual spring excursion.

Many of the 26 female travelers saw the ocean for the first time on the bus ride to Miami before boarding a plane for their first-ever flight — in high heels, church dresses and white gloves, no less. The experience was so noteworthy it made the Atlanta Journal newspaper, and so memorable class members were still talking about it at their 55th reunion in 2002.

Now with the recent normalization of relations, the college is heading back to Cuba for the first time since 1947. Travel of the armchair variety begins Monday, with the first of four 3D Journeys lectures focusing on Cuba. In May, about 30 3D program travelers will visit Havana and other areas of Cuba, led by President Dan McAlexander and first lady Celeste Myall.

Amanda Plumlee, who developed and currently chairs the college’s Latin American studies program, admits she “whooped and hollered” with joy when Cuba was chosen as the 2016 study topic. She was thrilled to be asked to give the opening lecture on Monday at 10 a.m. in Turner Hall. The lecture is free and open to anyone with an interest in learning, whether or not they plan to travel with the group.

“I feel honored and excited to participate in the lectures. The audiences are clearly lifelong learners,” said Plumlee, who will begin her 20th year at the college this fall.

Her lecture topic, “Cuba’s Literary Soul,” will be about more than books, she said.

“Cuba is unique in that a lot of its literature has been written by exiles. They describe a Cuba they loved and had to leave, a Cuba that no longer exists but is always frozen in their memories and their hearts.”

Learning about a country with a troubled and controversial history like Cuba is more easily approached by looking at its culture, she believes.

She spent her first decade as a professor at Davis & Elkins, a Presbyterian-related college in West Virginia, advancing to chair the foreign language department and serving as faculty president before being named assistant dean.

The chance to start a Latin American Studies program lured her to LaGrange nearly two decades ago.

“I like the excitement of launching something new and seeing it take shape,” she said.

Most of all, she liked the size and focus of the college.

“Teaching has always been my passion,” she said. “I like the liberal arts tradition because I like to get out of the box. I get to teach a variety of things, not just Spanish, and I get to know my students. That’s the best part of teaching in a small institution.”

Another great part, she believes, is the college’s focus on global engagement. The world has changed a lot since the class of 1947’s groundbreaking trip to Cuba. Today, LaGrange College students travel regularly to study in other countries, and Plumlee has led several trips to Spain. She has high hopes of someday taking a student group to visit Cuba.