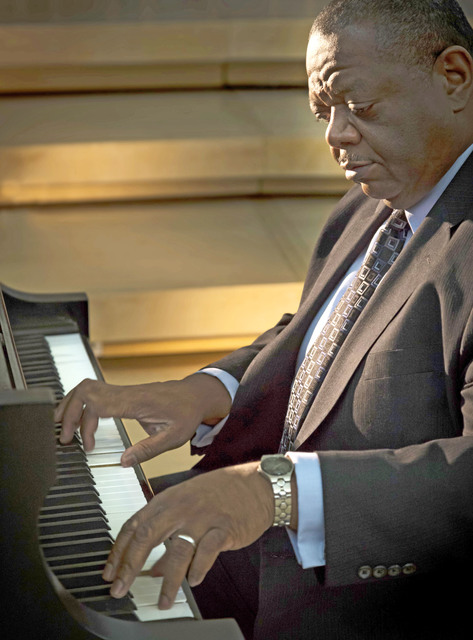 Acclaimed jazz pianist Gary Motley performs in an undated handout photo. Motley is slated to collaborate with the LaGrange Symphony Orchestra 7:30 p.m. Saturday in Callaway Auditorium for the one-time concert Music is Jazz.

http://lagrangenews.com/wp-content/uploads/sites/37/2016/01/web1_web0121Gmotley.jpgAcclaimed jazz pianist Gary Motley performs in an undated handout photo. Motley is slated to collaborate with the LaGrange Symphony Orchestra 7:30 p.m. Saturday in Callaway Auditorium for the one-time concert Music is Jazz.

The concert is 7:30 p.m. Saturday in Callaway Auditorium. The program also features the Gary Motley Trio along with Veronica Motley, an accomplished jazz vocalist and composer. These jazz musicians will be joined by the LSO Chamber Orchestra.

Gary Motley is best known for his captivating performances, classic yet current sound and popularity in the southeastern United States jazz music scene. Motley has received awards from the National Endowment for the Arts, the Great American Jazz Piano Competition and the American Composers Forum, or ACF.

Featured in Downbeat and on Piano Jazz with Marian McPartland, his notable performances include the premiere of his first orchestral work, “The Artist and the Visionary,” duo performances with pianists Dave Brubeck and Kenny Barron, and concerts with Jon Faddis, Eddie Daniels and Benny Golson.

Motley’s selection by the ACF as an artist-in-residence led to his second composition for string orchestra and jazz trio, “The Resolution of a Dream.” He premiered his “Highland Summit: A Suite for String Quartet and Jazz Quartet” with the Vega String Quartet in 2006 at the Highlands Chamber Music Festival and performed his piece “Suite Odyssey” at Carnegie Hall in 2007.

In 2010, his composition based on a work by Toni Morrison premiered at the Toni Morrison Society’s sixth Biennial Conference in Paris. Recent engagements include the 2014 National Black Arts Festival with Wynton Marsalis and Marcus Belgrave, the 2015 Emory Jazz Festival with violinist Regina Carter, bassist Rodney Whitaker and drummer Carl Allen and a summer tour of Colombia, South America.

As the director of Jazz Studies at Emory University, Gary has developed The Strickland Jazz Studio, an interactive teaching facility that integrates the rich heritage of American jazz with today’s technology practices. He holds memberships with the National Academy of Recording Arts and Sciences and the Jazz Education Network.

Joining the Gary Trio will be accomplished vocalist and composer, Veronica Motley. A graduate of the University of Alabama at Birmingham and the Georgia School of Professional Psychology, she was formerly a vocalist for the Alabama Jazz Hall of Fame’s Heritage Big Band and Jazz Combo.

Her performance venues include the Atlanta Jazz Festival, the W.C Handy Festival, the Weindorf Arts Festival, Atlanta’s High Museum and the Highlands Chamber Music Festival. She has shared the stage with artists ranging from the Commodores and the Magic City Orchestra to Barbara Morrison and guitarist Mundell Lowe.

She can be heard on the Birmingham Heritage Band’s 2002 recording “Birmingham is Our Home” and has also been featured on BET’s Jazz Discovery. Other recordings include “The Good Life” in 2001, “Keypers” in 2002, “Everything I Love” in 2005, “Where Land Meets Sky” in 2006 and “Seasoning” in 2011. Three of her compositions — co-written with jazz pianist Gary Motley — are among those included on the album “Departure” in 2014.

“Jazz is an incredibly deep and unique part of American culture,” said Richard Prior, music director and conductor of the LSO. “For several decades, the artistry of Gary Motley has been celebrated internationally through live performances, broadcasts and recordings. To have him in our own back yard in Atlanta has given us tremendous opportunities to collaborate over the years. I am thrilled to do so now with the LSO and can promise an evening that will be, in the words of Nat King Cole, ‘Unforgettable!’”

All tickets are $40 and proceeds will benefit the many educational initiatives of LaGrange Symphony Orchestra. For tickets, special group rates on 10 or more tickets or more information, contact the LSO office at 706-882-0662 or email info@lagrangesymphony.org or visit us online at www.lagrangesymphony.org.

By Tyler H. Jones tjones@civitasmedia.com Firefighters gather outside a home in the first block of Whiting Street following a fire... read more