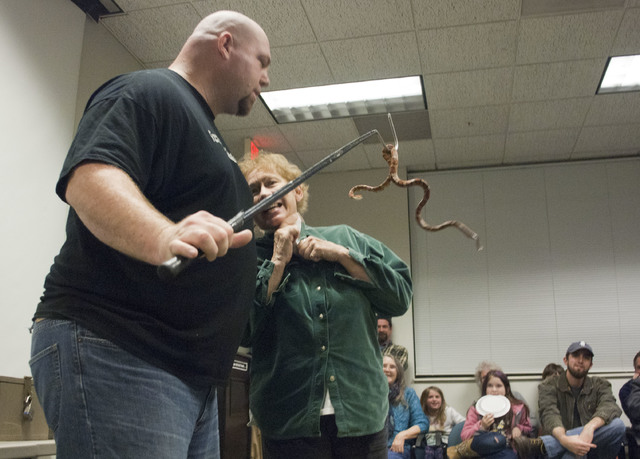 Jason Clark, a reptile conservationist, handles a copperhead snake during a presentation at the LaGrange Memorial Library on Tuesday. The LaGrange Sierra Club hosted the event as part of an effort to reach out to families and new members.

http://lagrangenews.com/wp-content/uploads/sites/37/2016/01/web1_Reptile01WEB.jpgJason Clark, a reptile conservationist, handles a copperhead snake during a presentation at the LaGrange Memorial Library on Tuesday. The LaGrange Sierra Club hosted the event as part of an effort to reach out to families and new members.

Mary Drake, right, reacts as Jason Clark, a reptile conservationist, dangles a harmless garter snake in front of her during a presentation at the LaGrange Memorial Library on Tuesday.

http://lagrangenews.com/wp-content/uploads/sites/37/2016/01/web1_Reptile02WEB.jpgMary Drake, right, reacts as Jason Clark, a reptile conservationist, dangles a harmless garter snake in front of her during a presentation at the LaGrange Memorial Library on Tuesday.

LaGRANGE — If you don’t want to be bitten by a snake, don’t go within striking distance.

That advice, given by reptile conservationist Jason Clark at a talk Tuesday at the LaGrange Memorial Library, doesn’t seem to be a tip he takes himself.

As a professional snake wrangler, Clark has appeared on the TV channel Animal Planet and works throughout the Southeast, rescuing reptiles ranging from alligators to venomous cobras. The LaGrange branch of the Sierra Club, the nation’s oldest and largest environmental club, invited him to speak at the library to share his passion.

Laura Breyfogle, head of the local Sierra Club, said her group wanted to provide more family-fun events for people to learn about nature and the outdoors.

“We’re working on diversifying our audience,” she said. “We had a great turnout tonight.”

About 200 people packed the Fackler Room of the library to watch Clark handle snakes ranging from the harmless garden variety to a venomous timber rattle snake. Children from all ages and backgrounds huddled on the floor — a few feet back — as Clark explained the importance of protecting snakes.

“There’s a lot of people who do all types of conservation,” he told the crowd. “The reason we do snakes is because you can’t think of a single animal that is more hated, more feared and has more myths about them than snakes.”

Quick with a joke, Clark entertained his audience with humorous anecdotes about growing up with a love for snakes and a love for a mother who hated them.

At one point, he asked Sierra Club member Mary Drake to come to the front of the room and handle one of the harmless snakes. He told her to stand in front of him, facing forward as he went behind her and used a tool he uses to pick up snakes to trick her into thinking he’d put one on her back. Shortly after, he dangled a garter snake in front of her before wrapping it around her neck.

Drake reacted as many people would — slightly unnerved — but later said she enjoyed the experience.

Clark also offered tips for identifying snakes in Georgia. In the state, it is illegal to kill any snake that is not venomous, he noted. Three varieties of venomous snakes live in Georgia: rattle snakes, copperheads and cottonmouths.

Copperheads, he said, can be identified by the Hershey Kiss-shaped pattern on the sides of their body. He doesn’t recommend identifying snakes by the triangle or diamond shaped head because some snakes can actually shift the bones in their head to look venomous, he said.

Ivory Bennett, a 7 year old who came with her family to see the snakes, said she enjoyed the show, even if it was “kind of scary,” she said.

For more information about Clark or his rescue operation, Southeastern Reptile Rescue, visit www.snakesareus.com. To learn more about the local Sierra Club, or to find out about upcoming events, search Facebook for “LaGrange Sierra Club.”