Troup stumbles at home against Carrollton 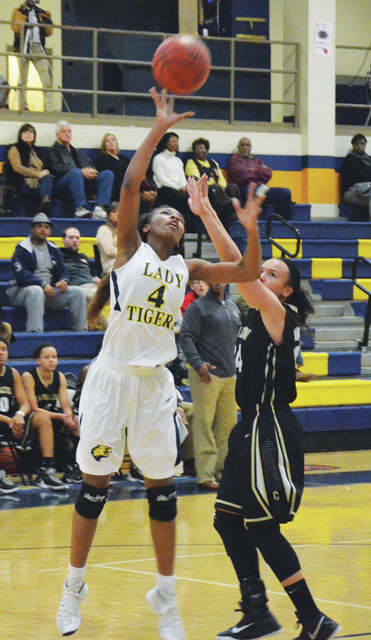 Troup’s Jedda Madden gets a shot away during the first half. Kevin Eckleberry | Daily News

http://lagrangenews.com/wp-content/uploads/sites/37/2016/01/web1_troup121.jpgTroup’s Jedda Madden gets a shot away during the first half. Kevin Eckleberry | Daily News

LAGRANGE – The Carrollton Lady Trojans finished second in the state last season, and they have the look of a team capable of making another deep tournament run this year.

On Tuesday night, the Lady Trojans showed how dangerous they can be when they beat the homestanding Troup Lady Tigers 70-32.

The game put an end to the first half of the Region 5-AAAA schedule for Troup.

The Lady Tigers (7-10 overall) will carry a 1-4 region record into Friday’s home game against Sandy Creek.

Troup was ahead 5-3 moments into the game, but Carrollton finished the first quarter on a 10-0 run to take a 13-5 lead.

After falling behind by 12 points, Troup closed the gap to 10 when Kwyneshia Spence made a pair of free throws with 5:33 left in the half.

The rest of the quarter belonged to the Lady Trojans, who soared to a 28-11 lead at the break.

The Lady Trojans continued to pull away in the third quarter, outscoring the Lady Tigers 21-12 to seize a 49-23 lead.

The story was much the same in the fourth quarter as Carrollton continued to pull away.

Spence paced the Lady Tigers with 14 points, and she was 8-of-12 from the free-throw line.

Emily Waters, one of three Carrollton players in double figures in scoring, led her team with 23 points.

In Friday’s game, Troup will be looking to turn the tables against Sandy Creek.

In the first meeting, Sandy Creek held on for a 50-46 victory on its home floor.

Troup will close the regular season with region games against Woodward Academy, Whitewater, Fayette County and Carrollton before the start of the region tournament.

Troup is looking to make it to the state tournament for the first time since the 2011-2012 season when it won a region title and reached the state quarterfinals.

It’s crunch time on the hardwood