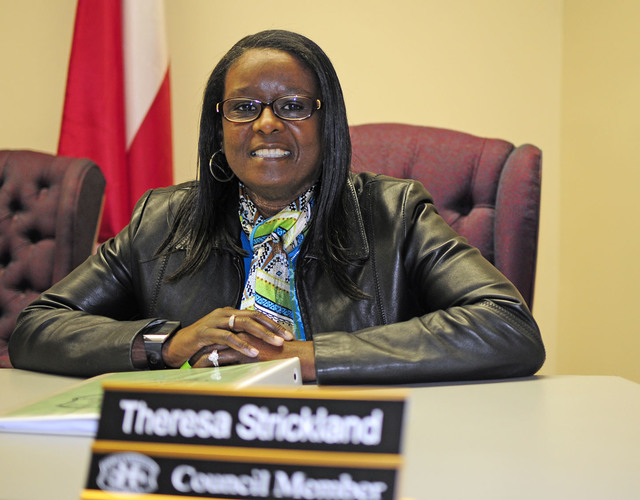 Councilwoman Theresa Strickland sits in council chambers Tuesday during City Council’s regular meeting. Strickland was sworn in Jan. 4 and is the first African-American woman on the Hogansville council.

http://lagrangenews.com/wp-content/uploads/sites/37/2016/01/web1_web0121Strickland1.jpgCouncilwoman Theresa Strickland sits in council chambers Tuesday during City Council’s regular meeting. Strickland was sworn in Jan. 4 and is the first African-American woman on the Hogansville council.

HOGANSVILLE — One of Hogansville’s newly inaugurated council members represents a piece of history for the town — she’s the first African-American woman to serve on the council.

Theresa Strickland was sworn in Jan. 4 to Hogansville City Council. She discovered that though there have African-American councilmen and there have been women on the council, there had not previously been a black councilwoman, a fact the Daily News confirmed with City Clerk Lisa Kelly.

“It’s very important to me,” Strickland said of the distinction. “I think that was evident on the fourth … I had a lot of supporters come and witness me be sworn in. it was a great event for me.”

Mayor Bill Stankiewicz said he felt the city has become extremely diverse over the last 25 years, and said voters don’t seem to choose candidates along racial or gender lines.

“We have elected females to the council and African-Americans to the council, and now having also elected a minority female shows that the city of Hogansville is an all-inclusive community,” Woods said. “That Hogansville looks at people for their qualifications and are not just looking for, say, a man to elect to office.”

Strickland felt her election to the council shows “that times are changing.”

“It shows that a female can come in and do the job,” she said.

She also felt it was significant that her inauguration was in the same month as the Rev. Martin Luther King’s birthday.

“I do think it is a big accomplishment to be the first African-American councilwoman,” Strickland said. “… I just want to do what’s best for the city and move forward.

Stankiewicz believed Strickland will help bring a new perspective to the council. He noted diversity of council members — in age, gender and occupation — helps contribute to discussions and views.

“I know Miss Strickland, and I’ve known her for a number of years,” Stankiewicz said. “She’s always been interested in the city, and personally, I’m extremely happy to have her on the council.”

Although the mayor admitted the city also has its share of racial issues, he said that the council has always been willing to talk to each other to reach an understanding. He also noted the city is taking part in the racial reconciliation program that he felt is “the right thing to do.”

“It gets people talking to one another and to sit down with one another,” Stankiewicz said.

Woods said Strickland also has been very passionate about her new position.

“Regardless of race or sex, she has been very attentive in getting up to speed in regards to her duties as a city council person,” he said. “She’s spent a great deal of time talking to me and coming to me for various different issues.”

Strickland said she wants to concentrate on helping the city run effectively and efficiently. She also wants to make sure the city is doing its best for residents on utility rates and service.

“We have customers who feel our rates are somewhat higher than other areas’,” she said. “That’s the perception. … Just keeping our citizens informed is a big (topic). As long as we’re open and transparent, I think it will work out for our city.”