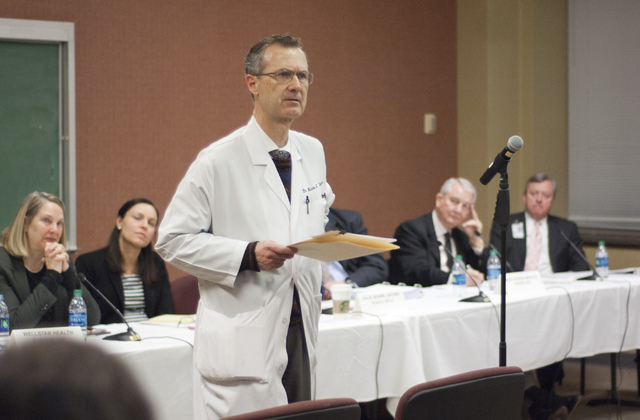 Dr. Richard Ingram, a physician with West Georgia Health, urges state regulators to approve a merger between WGH and Marietta-based WellStar Health System on Wednesday at a public hearing.

http://lagrangenews.com/wp-content/uploads/sites/37/2016/01/web1_Hearing01.jpgDr. Richard Ingram, a physician with West Georgia Health, urges state regulators to approve a merger between WGH and Marietta-based WellStar Health System on Wednesday at a public hearing.

LaGRANGE — The merger of West Georgia Health with Marietta-based WellStar Health System could provide nearly $40 million in benefits to area residents, according to testimony by a third-party auditor at a public hearing Wednesday.

WellStar is a $2 billion company with five metro-Atlanta hospitals and a network of health care providers serving 1.4 million people, and its partnership with WGH could reduce the local health care provider’s overhead costs, bring in new specialty physicians and provide cash for capital improvements, such as a renovated cancer center, according to David McMillan, a financial consultant who prepared a community benefit report submitted to the state attorney general’s office on behalf of West Georgia Health.

The report was prepared as part of the state’s regulatory approval process governing the proposed transfer of control of WGH to WellStar. The state attorney general’s office is expected to finalize a decision about approval by March 31.

McMillan testified before Senior Assistant Attorney General Julie Jacobs during a two-hour public hearing at WGH and said the proposed partnership could provide a “broader and deeper” level of medical services at WGH and other benefits, including WellStar’s “efficient” supply chain and “enhanced certainty” that the community will “continue to enjoy” debt service on a $46.6 million taxpayer-backed bond that partially financed the construction of WGH’s new south tower.

Although the merger — more formally called a “member substitution agreement” — is technically a sale under Georgia law, no money will change hands if WellStar acquires WGH. The local board of trustees that oversees the day-to-day operations of WGH would remain intact, with an additional two new representatives from WellStar added to the board, according to testimony by Candice Saunders, WellStar’s president and CEO. Two representatives from WGH’s board would also be added to WellStar’s corporate board to represent WGH’s interests, she added.

Saunders told regulators WellStar “relies heavily” on local boards to drive decision-making and their input would be “critical to success.” She also testified that WellStar has no plans to reduce core medical services offered at WGH, or make any changes to existing Medicare, Medicaid or indigent care programs at WGH. The emergency room will continue to operate around the clock, she added.

WellStar has pledged $84 million in capital investments at WGH over the next seven years, $30 million of which would be spent in the first two years to renovate the Enoch Callaway Cancer Clinic. Down the line, less visible but equally important investments such as conversions of payroll and electronic medical records software would be made, Saunders told regulators.

WellStar’s promise to infuse millions of dollars into WGH was a key factor in the decision by WGH’s board to partner with WellStar, according to testimony by Jerry Fulks, president and CEO of West Georgia Health.

He said capital improvements were a “big issue” for the hospital, and that the board sought assurances during negotiations to be sure those improvements would continue. If WellStar’s acquisition of WGH is approved, the pace of projects like the cancer clinic renovation could be accelerated with the introduction of WellStar’s deep pockets. The fundraising arm of WGH, the West Georgia Health Foundation — a separate nonprofit — is not affected by the proposed merger of WGH and WellStar, and the foundation will continue to conduct fundraising campaigns for capital improvement projects as it has in the past.

The brick-and-mortal hospital will continue to be owned by the LaGrange-Troup County Hospital Authority, which currently leases it to WGH. If the merger is approved, WellStar would become the new lessee.

WGH is Troup County’s third-largest employer and provides 1,400 jobs. If regulators approve WellStar’s acquisition, Saunders promised her organization would work to be an “employer of choice,” and that “our people are our greatest asset.” Under previous negotiations, WellStar has pledge not to lay off any employees for the first six months if the merger is approved. Beyond that, the health system would evaluate future needs and make adjustments as it deems necessary.

Mike Patton, chairman of the WGH board of trustees, testified that WellStar would be a “good cultural fit” for WGH and the hospital would be financially stronger as part of a larger organization. He told regulators that after narrowing the merger candidates down, the board ultimately decided that being part of a nonprofit system, which WellStar is, would be beneficial and continue focus on patient care rather than profit. Initially, 26 other hospital systems were solicited by WGH and that number was eventually narrowed to three: two nonprofit and one for-profit. The final decision to go with WellStar was influenced by WellStar’s headquarters being in Georgia, he said.

Because of antitrust laws and confidentiality agreements, neither WellStar nor WGH are able to comment on whether changes could come in health care cost or insurance acceptance if the merger is approved. Those details will be revealed if regulators approve the deal, at which point WGH and WellStar would have better access to each other’s finances, WGH’s Fulks said.

Three physicians spoke during the public comment portion of the hearing, all of which offered their support for the deal. Dr. Sandy Simmons, a physician with WGH, said that 20 years ago, someone told him that today WGH would be “no more than a first-aid station,” and that WellStar’s model of health care delivery will ensure that won’t happen. He urged regulators to approve the agreement.

Public comment will remain open until Friday at 5 p.m. and may be submitted to the state attorney general’s office by telephone, fax or email. To make a comment, write to Keisha Green, hearing coordinator, Georgia Department of Law, Business and Finance Section, 40 Capitol Square SW, Atlanta, Georgia, 30334, or call 404-463-7307.