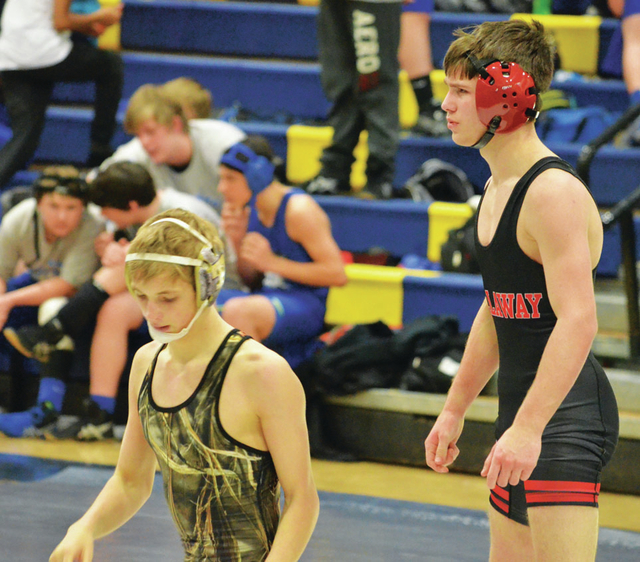 LAGRANGE – It was the usual suspects leading the way for the Callaway High wrestling team.

During Callaway’s two matches in the county championship on Wednesday at Troup High, Justin Kiss, Andrew Thomas and Gabriel Liranzo each emerged victorious during their matches.

Kiss, Thomas and Liranzo, along with Matthew Wingate, have been Callaway’s most consistent wrestlers this season, and they delivered strong performances on Wednesday.

Callaway head coach Josh Ghobadpoor knew his team would have a tough time competing with LaGrange and Troup, but he felt his wrestlers made a fine account of themselves.

“Our goal is to get respect. That was our goal coming in.” Ghobadpoor said. “We knew they had a lot of firepower. Those teams are loaded up with full lineups. We’re still really new, and really young. Our goal was to get some respect, and I think we accomplished that goal.”

A year ago in the county championship, Callaway left more than half of the spots unfilled, leading to a bunch of forfeits.

On Wednesday, there were only two spots unoccupied, and Ghobadpoor said most of the matches were hard-fought.

“We were competitive in a lot of those matches,” Ghobadpoor said.

For Kiss, it was more of the same.

The sophomore, who was a state placer a year ago, remained perfect on the season, and Ghobadpoor believes he could be even stronger as he settles into his preferred weight division.

In addition to Thomas, Wingate and Liranzo, Ghobadpoor said some other Callaway wrestlers including Khaliq Swift and Brandon Boddie have a chance to do some big things at the traditional area meet that is coming up next week.

Ghobadpoor said preparing for area is the team’s primary focus.

“County championship’s a fun thing, a cool thing, but state is what we’re really shooting for,” Ghobadpoor said.