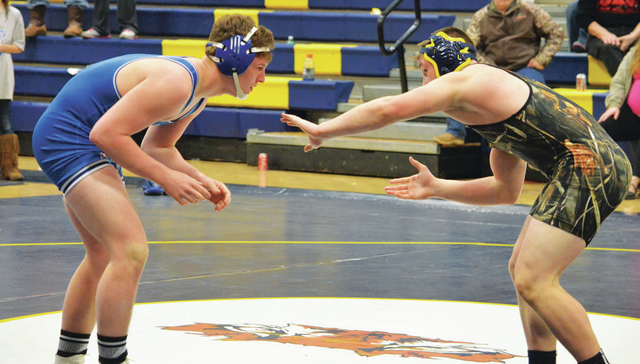 John Todd Bohn won by pin to give LaGrange a 33-27 lead, but Troup rallied for a 36-33 win. Kevin Eckleberry | Daily News

LAGRANGE – Everything was going their way.

In their quest to reclaim the county wrestling championship, the LaGrange Grangers were rolling along with a 27-9 lead over the Troup Tigers on Wednesday night, and they’d won five of the first six matches.

The outcome was a long way from being decided, though.

Troup began to fight back, and by the time the final two wrestlers were on the mat, the match was deadlocked at 33-33.

When Brantly Robinson won by decision over Kane Shirey, the Tigers had the 36-33 victory, and they’d won the county championship for the second straight year.

It was a heart-breaking loss for the Grangers, who were agonizingly close to winning the county title for the first time since 2014.

After Guy Wegienka won his match at 195 pounds, LaGrange only won one of the final five matches that were decided on the mat.

Weathers thought it would be a close match that likely wouldn’t be decided until the final match, and that’s what happened.

“Those types of matches are real exciting for the coaches, the wrestlers, and the fans, too,” Weathers said. “Everybody got their money’s worth.”

After losing the opening match, the Grangers got their first points in the second match when Matt Watford won by decision over Trey Harris to even things up at 3-3.

Watford took a 6-1 lead after the first period, and he ended up winning 12-5.

LaGrange lost the third match by pin to fall behind 9-3, but Dominique Copeland pinned Byron Butts at 160 pounds to tie the match at 9-9.

That was the first of four consecutive pins for the Grangers as they took what appeared to be a commanding 27-9 lead.

Phillip Lee hung tough at 220 pounds, and even though he lost 8-1 to Colby Harry, he avoided getting pinned, so LaGrange only lost three points instead of six.

When Emmanuel Mann made his way onto the mat to face Troup’s Hudson Newton in the 285-pound match, the Grangers had a 27-12 lead.

Mann hadn’t dropped a match all season, but he ended up getting pinned by Newton with just four seconds left in the second overtime period.

The Grangers still had a 27-18 lead, but the Tigers had some of their best wrestlers on the way.

LaGrange fought back to take a 33-30 lead when John Todd Bohn got a second-period pin of Darius Hanson, and there were two matches remaining.

There was all sorts of drama at 126 pounds.

LaGrange’s wrestler at that weight class was senior Dakota Wilson, who began the season at Troup before transferring.

Wilson was matched up against his former training partner, Troup sophomore Chase Seals, and it was Seals coming away with a 6-5 victory in an exciting and hard-fought match.

That tied it at 33-33, and Robinson outlasted Shirey 7-3 at 132 pounds to give his team the narrow three-point win.

In LaGrange’s first match of the day, it beat Callaway 51-27.

LaGrange will return to action this weekend at the Bowdon Invitational, and it will be at home on Monday for senior night.

LaGrange will host the Area 1-AAAAA traditional tournament on Jan. 29-30, with the top four finishers in each weight class qualifying for the state sectionals.