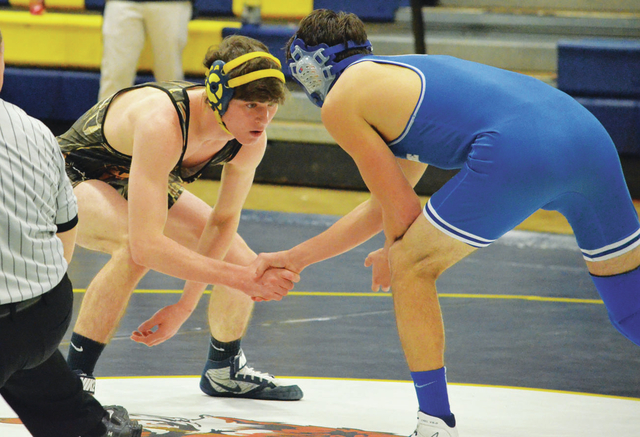 Troup’s Brantly Robinson and LaGrange’s Kane Shirey wrestle in the final match of the county championship. Robinson won by decision to give Troup the decisive points. Kevin Eckleberry | Daily News

http://lagrangenews.com/wp-content/uploads/sites/37/2016/01/web1_troup-robinson.jpgTroup’s Brantly Robinson and LaGrange’s Kane Shirey wrestle in the final match of the county championship. Robinson won by decision to give Troup the decisive points. Kevin Eckleberry | Daily News

LAGRANGE – He embraced the challenge.

In the critical second-to-last match in Wednesday’s county-championship showdown, Troup’s Chase Seals made his way onto the mat to take on his former teammate, Dakota Wilson, who now wrestles for LaGrange High.

Wilson is an outstanding wrestler, and Troup head coach Craig Garner knew it was going to be a challenge for one of his men.

It was either going to be Seals or Brantly Robinson who would get the task of wrestling Wilson.

“We came to that point, I just said hey, which one of you wants it,” Garner said. “Chase beat Brantly on the draw. He was like coach, I want it. He got the opportunity. That’s what I want. Both of them wanted it. Big-time match, a big stage, and they both wanted it.”

Seals was ready for the moment.

It was a hard-fought, close match, and Seals ended up securing a 6-5 victory to give his team three crucial points, and Troup and LaGrange were tied 33-33.

“They asked who wanted him, and I said me,” Seals said.

Robinson was next on to the mat for a huge match of his own.

In another competitive match, Robinson ended up beating LaGrange’s Kane Shirey 7-3, giving Troup the three points it needed to win the county championship for the second straight year.

Against LaGrange, Troup closed with a flourish, winning five of the final six matches, including one by forfeit at 106 pounds.

“You always talk about it, you always tell them, to battle through adversity,” Garner said. “The real world, real life, it’s always about adversity. We were down at one point 27-9, and we stayed true to our game plan.”

One of Troup’s most critical wins came in the 285-pound division.

LaGrange’s Emmanuel Mann came into his match against Troup’s Hudson Newton with an unblemished record on the season.

Newton is a terrific wrestler in his own right, though, and he was a state placer last season, so he was up for the challenge.

It was tied at the end of regulation, and with just a few seconds remaining in the second overtime period, Newton pinned Mann, giving his team six big points.

“I knew it was going to be tough,” Newton said. “I went in, and I knew what I had to do. I knew he weighed a good bit more than I weighed. I knew I’d have to stall him out, and capitalize on where he was vulnerable.”

With time winding down in overtime, Newton saw his chance, and he pounced.

“I looked up, and his arms were dangling, and I thought I would capitalize with two seconds left,” Newton said. “I did.”

In the match right before at 220 pounds, it was Colby Harry who started Troup’s run.

Then came Newton’s big win, and because he got the pin, Troup put six more points on the board, and LaGrange led 27-18.

“I wanted to get a pin, so it would put us closer to winning,” Newton said.

Robinson, who was warming up for his upcoming match, felt the momentum turned in a big way after Hudson’s victory.

“That was a big momentum changer,” Robinson said. “Everybody was excited. The wrestlers, the fans, the coaches, everybody.”

LaGrange didn’t have a 106-pound wrestler, so Troup’s Steven McClendon was awarded the forfeit victory, and that was six more points.

Just like that, Troup had wiped out all but three points of its once daunting deficit.

Thanks to Trevor Upchurch, Troup was about to take the lead.

In the 113-pound match, Upchurch pinned Colt Creed in the third period, and those six points gave Troup a 30-27 lead.

Onto the mat walked Seals and Wilson, who a little more than a month before were training partners.

It was close from the get-go, with Seals leading 3-2 after the first period, and it was tied 3-3 at the conclusion of the second period.

In the end, it was Seals finishing one point better than his former teammate.

Then it was Robinson’s turn, and Seals had no doubt about the outcome of that match.

“I knew he would win,” Seals said.

Despite the pressure of the moment, and with so much riding on the outcome of his match, Robinson said his strategy wasn’t altered a bit.

“It didn’t change the way I thought about wrestling,” Robinson said. “I wanted to win. I went as hard as I could and I got the win.”

Robinson said he was more than happy to have his team’s fate resting on his shoulders.

“You always want to be that guy,” he said.

The match started with Jeremiah McClendon getting a 7-5 win over Chase Sams at 138 pounds, giving Troup a 3-0 lead.

At 152 pounds, Troup’s Scott Hicks delivered one of the night’s most dominant performances, getting a pin early in the first period to put his team ahead 9-3.

LaGrange then ripped off four straight wins before Troup mounted its stirring comeback.

Garner said the hard work the wrestlers have been putting in paid dividends on Wednesday.

In Wednesday’s early match against Callaway, Troup was dominant.