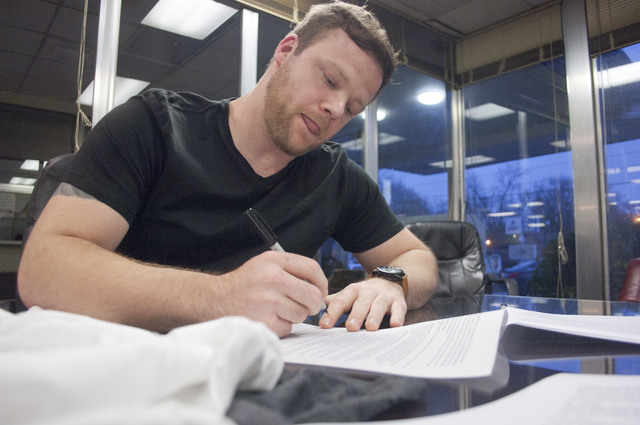 Daniel Toole, a local musician, signs his first recording contract with NeoBolical Records, a newly formed recording company based in LaGrange, following an interview at the LaGrange Daily News office Thursday. NeoBolical is owned and operated by Sandy and Joshua East, two brother from LaGrange.

http://lagrangenews.com/wp-content/uploads/sites/37/2016/01/web1_NewStudio01WEB.jpgDaniel Toole, a local musician, signs his first recording contract with NeoBolical Records, a newly formed recording company based in LaGrange, following an interview at the LaGrange Daily News office Thursday. NeoBolical is owned and operated by Sandy and Joshua East, two brother from LaGrange.

“I’m very excited,” Toole said, whose birthday was also Thursday. “It’s a great gift. It’s a dream come true. … It’s something I’ve thought about since I was a little kid.”

Toole, 32, started performing in front of audiences only two and a half years ago, and has played live at numerous venues in LaGrange and places as far away as Manassas, Virginia.

A guitarist and vocalist, Toole described his musical style as “popular acoustic rock.” He performs his own original songs, along with popular favorites from musicians and bands ranging from country musician Garth Brooks to ’90s grunge rock band Nirvana. His upcoming album will include about eight or nine original songs, and its release will be in honor of his mother, who passed away seven years ago.

“It’s a big deal to be able to release on my mother’s birthday,” Toole said. “She passed away and I’d love to be able to honor her memory by doing this.”

Toole said that although he’s dabbled in music for years, it wasn’t until a friend asked him to perform live that be began playing for audiences.

“I never had any aspirations of playing publicly,” he said. “I had a friend that was an event coordinator at Mare Sol (restaurant on Main Street), and she’d seen me play. She asked me to come sing and that was the first time I ever performed in public.

“Since then, I’ve kind of grabbed it by the coat tails and here we are,” he said.

Toole thanked the public for their support of his music, which he’s shared with dozens of events including the annual Tunes for Tots fundraiser for the U.S. Marine Corps’ Toys for Tots program.

Although Toole is the first artist Sandy and Josh East have signed, they’re hoping it won’t be their last.

“We’re striving to let people know we’re trying to be different,” said Josh East, 28. “We want to build relationships with musicians and help them get their music out there.”

The Easts’ record company is slightly different from the traditional setup, he said.

Their equipment is all mobile, and they’re capable of bringing the studio to the musician, rather than the other way around, he added.

“We can cut live albums, but anywhere we go can be record quality,” Josh East said.

He said his brother, Sandy East, has a degree in music recording and he’ll do most of the studio operations while Josh East will manage the promotion and relationships with artists.

Toole and Josh East said they hope to begin recording Toole’s new album soon and a release date will be announced at a later date.

For more information about Neobolical Records, visit www.neobolical.com or search for them on Facebook. For information on Daniel Toole’s music, visit www.facebook.com/AcousticEcho84.