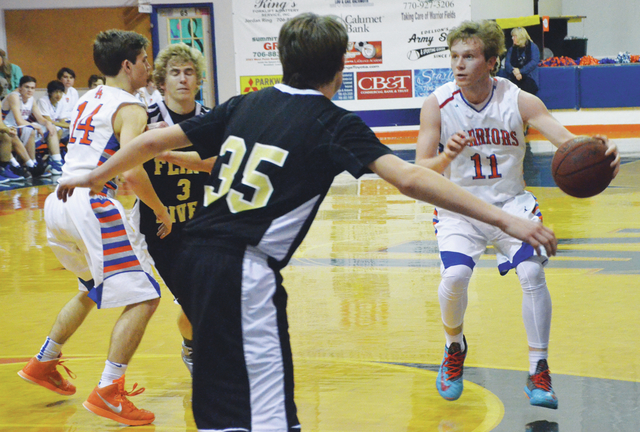 LaGrange Academy’s Whit Moreman goes to the basket during the first half of Friday’s game against Flint River. Moreman, one of the seniors who was honored before the game, scored 27 points in the 64-35 victory. Kevin Eckleberry | Daily News

http://lagrangenews.com/wp-content/uploads/sites/37/2016/01/web1_LGA4-1.jpgLaGrange Academy’s Whit Moreman goes to the basket during the first half of Friday’s game against Flint River. Moreman, one of the seniors who was honored before the game, scored 27 points in the 64-35 victory. Kevin Eckleberry | Daily News

LAGRANGE – It was a winning senior night for the LaGrange Academy Warriors.

Before Friday’s game against Flint River Academy, the six seniors on the LaGrange Academy boys’ team were honored, and those players then went out and helped the Warriors win the GISA Region 1-AA game 64-35.

The Warriors (11-5 overall) improved to 6-2 in the region with the one-sided win over their rivals from Woodbury.

The Warriors held a 12-point lead at the half, and they outscored the Wildcats 23-4 in the third period to put the game away.

“Senior night is always weird, because there’s a lot of stuff going on,” LaGrange Academy coach Britt Gaylor said. “It takes you awhile to get locked in, and we did. The third quarter, we held them to four points, and that was big for us to come out and play like that defensively, which led to offense.”

One of LaGrange Academy’s seniors, post player Whit Moreman, made his return to the lineup after missing a game with an ankle injury and scored a game-high 27 points.

Parker Williams made a pair of 3-pointers and led Flint River with 13 points, and Luke Hardaway scored 10 points.

The Warriors finished the first quarter on a 6-0 run to take a 15-8 lead, and they continued to pull away in the second period to take a 30-18 lead at the half.

Senior Zach Callaghan sent the Warriors to the halftime break with some momentum after hitting a 3-pointer at the buzzer to give his team a double-digit lead.

The third quarter was all LaGrange Academy.

Trotter and Heath hit back-to-back 3-pointers to give the Warriors their largest lead of the game at 48-22.

Those two shots were part of an 11-0 run to end the quarter that gave LaGrange Academy a 53-22 cushion heading into the final period.

Moreman, who was unstoppable in the paint, had 10 points in the third period.

Gaylor emptied his bench in the fourth quarter, and the Warriors continued to play well, with eighth-grader D.J. Burks hitting a 3-pointer, and Mason Brown and Alex Wilson both scoring as well.

“They always play hard,” Gaylor said of the Wildcats. “It was a good game, and it was good for us to play like that in the second half.”

In the girls’ game, it was all Flint River.

Leah Major and Laney Anderson each scored six points for LaGrange Academy, and Abby Porter had 21 points for Flint River.

LaGrange Academy’s teams will be on the road against Colonial Hills on Monday.