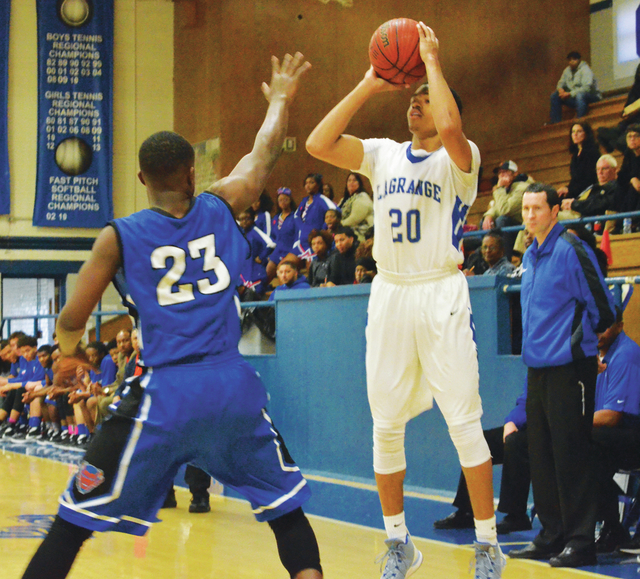 LaGrange’s Kenan Gray swats a shot away during the second half of Saturday’s win over Columbus. Kevin Eckleberry | Daily News

http://lagrangenews.com/wp-content/uploads/sites/37/2016/01/web1_LHS7-1.jpgLaGrange’s Kenan Gray swats a shot away during the second half of Saturday’s win over Columbus. Kevin Eckleberry | Daily News

LaGrange’s Gabe Duckett gets a shot away in the second half. Kevin Eckleberry | Daily News

http://lagrangenews.com/wp-content/uploads/sites/37/2016/01/web1_LHS8-1.jpgLaGrange’s Gabe Duckett gets a shot away in the second half. Kevin Eckleberry | Daily News

LAGRANGE – It was still a ballgame.

With less than two minutes remaining in Saturday’s game, the homestanding LaGrange Grangers were clinging to a four-point lead over a Columbus team looking to pull off a second straight upset.

The night before, Columbus had handed Carver its first region loss of the season, and it was in position to knock off another one of the region’s powerhouses on Saturday.

That was still a very real possibility of that happening when LaGrange junior post player Kenan Gray got the ball near the basket.

The 6-foot-6 Gray elevated, and he powered home a dunk while being fouled, bringing his teammates and coaches on the bench to their feet in celebration.

Gray made the ensuing free throw to complete a three-point play, and LaGrange’s lead had grown to seven.

There was still plenty of time left for the Blue Devils to mount a comeback, but the rest of the game belonged to the Grangers, who rolled to a 69-57 victory.

It was an important win for the Grangers (17-4 overall), who improved to 6-2 in Region 1-AAAAA and remained in a tie for first place.

In Saturday’s game, the Blue Devils had climbed to within two when Derieko Smith scored for the Grangers, and moments later, Gray delivered his thunderous dunk.

Indeed, the Grangers finished the game on a 10-0 run to turn a tight game into a blowout.

Columbus came into the game with just two region wins, but considering one of those was against Carver, LaGrange’s players weren’t about to overlook Saturday’s game.

“We were ready,” Gray said. “They beat Carver yesterday, and Carver was the number one team in the region.”

“We went 10-deep tonight,” LaGrange head coach Mark Veal said. “We had some guys step up and play well.”

The Grangers were hot early.

Perry made two of the Grangers’ four 3-pointers in the first period as they surged to a 20-13 lead, and by the half they were ahead 34-23.

The Grangers maintained a double-digit cushion for most of the third quarter.

The Grangers were ahead by 14 points after Alex Dantzler made his second 3-pointer of the third quarter, but the Blue Devils rallied and got within seven before Bryan Fanning scored at the buzzer to give the home team a 51-42 lead.

The Blue Devils wiped out almost all of the lead with a 7-0 run to start the fourth quarter, and with 5:30 left in the game, the Grangers’ lead was 51-49.

Duckett ended the scoring slide with a 3-pointer, putting the Grangers back up by five points, but the Blue Devils wouldn’t go away.

The Blue Devils got as close as one point, and later in the quarter when they were within two, they had four straight possessions with a chance to tie it or take the lead with a 3-pointer.

Each time the Blue Devils came up empty, and Smith scored with 2:35 left to put the Grangers ahead 61-57.

After a Columbus miss, Gray came down with the rebound.

LaGrange ran more than 30 seconds off the clock, and Gray finished that possession with his dunk and free throw, and just like that it was a seven-point game.

“He went up there, and instead of laying it in, he flushed it,” Veal said. “He attacked. He made the free throw, and he made it a three-possession game.”

The Grangers did the rest of their scoring from the free-throw line.

Smith and Perry each made two free throws, and Fanning made one as LaGrange won going away.

LaGrange will be back home on Tuesday for a huge region showdown against Carver, and first place will be on the line.

LaGrange finishes the week with a road game against Shaw on Friday.