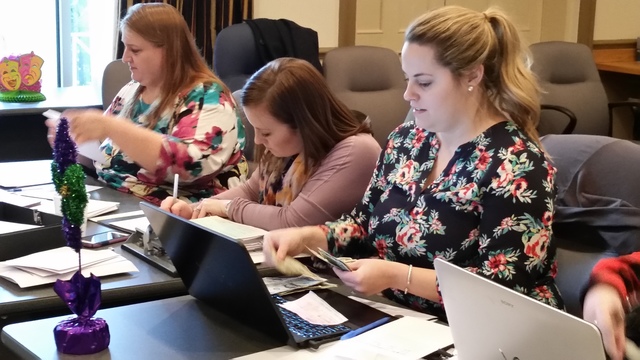 Zsa Zsa Heard, second from left, a candidate for Behind the Mask Queen, drops off some last-minute donations from her campaign Monday morning at the Coleman Center.

http://lagrangenews.com/wp-content/uploads/sites/37/2016/01/web1_BTM02WEB.jpgZsa Zsa Heard, second from left, a candidate for Behind the Mask Queen, drops off some last-minute donations from her campaign Monday morning at the Coleman Center.

Twin Cedars representatives count last-minute donations brought in by candidates for King and Queen of the annual Behind the Mask fundraiser Monday at the Coleman Center. Supporters raised more than $40,000, organizers said.

http://lagrangenews.com/wp-content/uploads/sites/37/2016/01/web1_BTM01WEB.jpgTwin Cedars representatives count last-minute donations brought in by candidates for King and Queen of the annual Behind the Mask fundraiser Monday at the Coleman Center. Supporters raised more than $40,000, organizers said.

LaGRANGE — It came down to the wire for the Royal Court of the Twin Cedars Behind the Mask ball.

As the clock ticked down to noon Monday, nominees for this year’s King and Queen brought envelopes filled with check and cash donations to Twin Cedars’ representatives at the Coleman Center off Dallis Street.

For some, it was a mad dash to the end — turning in their money with less than a minute to go.

“I just want to count this last, little bit,” said candidate Kim Skiff as she rushed into the Coleman Center.

Monday was the last day for folks to vote for their candidate of choice to win the crown and title as King and Queen of the ball, which is a yearly fundraiser for Twin Cedars, a youth advocacy nonprofit.

In order for nominees to be victorious, they had to campaign for votes — with each vote costing $1 from their supporters.

Those dollars quickly added up for some candidates like Pam Herndon, who exceeded her goal of raising $5,000 for Twin Cedars.

“The campaign was great but maybe a little stressful,” Herndon said with a laugh. “All the candidates have been pulling for each other. Regardless, Twin Cedars is the winner, the children they serve are the winners and we raised a lot of awareness for the organization.”

“I think this is a fabulous way to raise money,” added candidate Zsa Zsa Heard, executive director of the LaGrange Housing Authority. “It’s almost a no brainer … you don’t have to sell sodas or anything, just ask for donations. Being here (Coleman Center) feels like we’re part of a telethon … I see all the computers here and the girls (Twin Cedars representatives) taking the donations … it’s very exciting.”

Lisa Wicker, public relations director for Twin Cedars, said it was still too early to tell who won the title of King and Queen, but she did confirm the early combined totals from all the candidates donations exceeded $40,000.

“This was an amazing year for Twin Cedars in the candidates involvement and donations,” Wicker stated. “Our candidates got the community at large involved in the campaign and there was an opportunity for everyone involved to support Twin Cedars.

“This year promises to be a record year for the children and families served by Twin Cedars,” she added. “All of the money will stay in our community to support all of the programs and services offered by the organization.”

Wicker said representatives of Twin Cedars will collect and count the donations and will hand them over to a local accounting firm who will certify the amount.

She hoped to have a final total by midweek — plus announce the 2016 King and Queen of the Behind the Mask Ball.

The winners will be officially crowned before the event this Saturday, Jan. 30 at 6 p.m. on the rooftop of Del’Avant.

The Mardi Gras-themed dinner and dance will take place immediately following the announcement.

Tickets to the Behind the Mask Ball are already sold out.