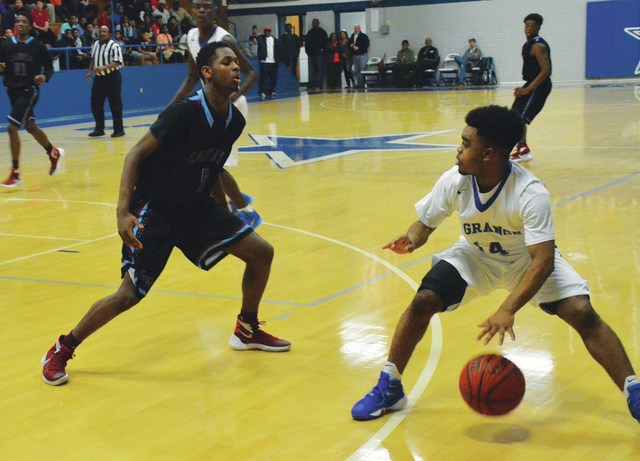 LaGrange’s Kenan Gray goes strong to the basket in the fourth quarter of Tuesday’s 78-61 over Carver. LaGrange remained in first place in Region 1-AAAAA with a 7-2 record. Kevin Eckleberry | Daily News

http://lagrangenews.com/wp-content/uploads/sites/37/2016/01/web1_LHS4-3.jpgLaGrange’s Kenan Gray goes strong to the basket in the fourth quarter of Tuesday’s 78-61 over Carver. LaGrange remained in first place in Region 1-AAAAA with a 7-2 record. Kevin Eckleberry | Daily News

Derieko Smith led LaGrange with 22 points, and he scored 16 of those points in the second half. Kevin Eckleberry | Daily News

http://lagrangenews.com/wp-content/uploads/sites/37/2016/01/web1_LHS16-1.jpgDerieko Smith led LaGrange with 22 points, and he scored 16 of those points in the second half. Kevin Eckleberry | Daily News

http://lagrangenews.com/wp-content/uploads/sites/37/2016/01/web1_LHS14-1.jpgLaGrange’s Bryan Fanning is fouled while shooting during the fourth quarter of Tuesday’s game. Fanning scored 11 points, and he was 4-of-4 on free throws in the fourth quarter. Kevin Eckleberry | Daily News

LAGRANGE – The Carver Tigers were surging.

After scoring four quick points following LaGrange turnovers, Carver had trimmed what was a 10-point deficit at the start of the fourth quarter to six, and there were still more than six minutes to play.

Were the Grangers going to let one slip away on their home floor?

LaGrange dominated the game’s closing minutes to roll to a 78-61 victory in a matchup of two teams tied for first place in Region 1-AAAAA.

The Grangers (18-4 overall) improved to 7-2 in the region, and they’re tied for first place with Shaw, and those two teams meet in Columbus on Saturday.

In Tuesday’s game, the Grangers were up 57-47 moments into the fourth quarter, but they turned the ball over on two straight possessions, and the Tigers turned those miscues into points to get within six.

Any hope Carver had of pulling off the road win was quickly dashed, though, as LaGrange scored seven points in less than a minute to go up by 13 points.

The Grangers held a double-digit lead the rest of the way.

“Teams are going to make a run,” said LaGrange’s Derieko Smith, who scored 22 points. “We just had to make one back, keep playing.”

Smith scored 16 of his points in the second half, and he made four of his team’s 11 3-pointers.

LaPerion Perry also had a big night with 19 points, and he made four 3-pointers as well.

“Obviously we shot well, guards and post players,” LaGrange head coach Mark Veal said. “We had the post players that got down there and battled and had some big buckets.”

Smith said the Grangers, who lost to Carver earlier this season, knew how big the game was.

“We’d been talking about it all week,” Smith said. “We went hard in practice, and we showed up.”

The Grangers started a bit slowly offensively, and the game was tied 11-11 at the close of the first period.

Jarious Freeman and Smith also made 3-pointers in the second quarter, and the Grangers made seven shots from long distance in the period.

In the third quarter, Smith heated up, scoring half of his team’s 18 points, and LaGrange led 55-47 as the fourth quarter got under way.

Smith scored again early in the fourth quarter to extend the lead to 10 before Carver made its move to make it a six-point game.

Then the Grangers took over.

When Smith made a 3-pointer with 5:32 left in the game, the Grangers were ahead 64-51, and they continued to pull away.

Gray, a 6-foot-6 junior, provided one of the night’s top highlights when he got in the open court and delivered a thunderous dunk, giving LaGrange a 76-58 lead.

Smith scored seven points to help LaGrange salt the game away in the fourth quarter, and Fanning scored six points in the final period while making all four of his free-throw attempts.

“I’m very pleased, but we’ve got a lot of ball left,” Veal said.

First up is Saturday’s showdown with Shaw, which battled LaGrange tough earlier in the season before losing 65-58.

Shaw improved to 7-2 in the region with Tuesday’s 79-62 win over Columbus.

LaGrange finishes the regular season with games against Harris County and Northside next week.

End of the road for LaGrange seniors