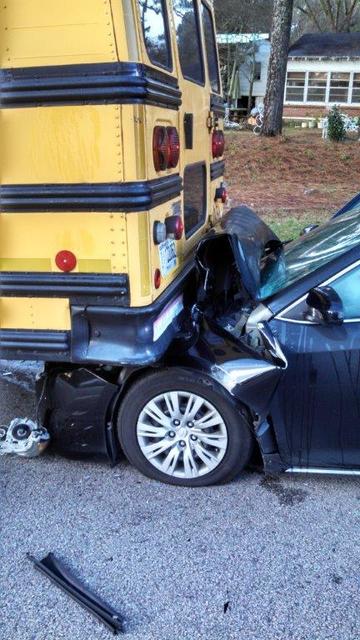 This accident on New Franklin Road on Dec. 18, 2015, was due to distracted driving, according to Georgia State Patrol Sgt. Maurice Raines, head of the local GSP post. The driver was tending to children in the back seat when the wreck occurred, Raines said.

http://lagrangenews.com/wp-content/uploads/sites/37/2016/01/web1_DistractedDriving02.jpgThis accident on New Franklin Road on Dec. 18, 2015, was due to distracted driving, according to Georgia State Patrol Sgt. Maurice Raines, head of the local GSP post. The driver was tending to children in the back seat when the wreck occurred, Raines said.

LaGRANGE — A glance down at a cell phone, a quick turn to check on kids or even a mindless daydream could be the difference between a peaceful car ride and a horrendous crash on any road or highway.

According to Sgt. Maurice Raines, commander of the Georgia State Patrol Post 2 LaGrange, in 2015 his troopers worked 1,626 accidents in Troup and Harris counties.

“A great percentage of those was from distracted drivers either striking vehicles in the rear or people running off the roads then over correcting,” Raines said. “Over and over my troopers are getting statements from these drivers such as, ‘I spilled my coffee.’ Or, ‘I dropped my phone.’

“All these acts are careless on the driver’s part,” he continued. “We would appreciate the motoring public to be careful and more aware while they are driving.”

Distracted driving was the cause of a Dec. 18 crash between a Troup County school bus and a car on New Franklin Road.

According to Raines, a woman driving behind the bus turned to check on her child — not realizing the school bus had come to a stop. She slammed into the back of it.

Two children on the bus complained of minor aches and pains, Raines stated. No one else was hurt.

Raines said the driver was cited for following too closely.

“People need to be aware they are driving a vehicle that could take their lives — or someone else’s life,” he said. “Though drivers may think these are minor infractions, but minor can easily turn fatal.”

“Something makes you over-react, like when you run off the side of the road,” he explained. “It’s because you weren’t paying attention. You hit that rumble strip and it made you jerk the car back onto the road.”

Turner and his fellow troopers are trained to be on the lookout for distracted drivers.

He said he has witnessed people driving while putting on make up, eating food and even reading a newspaper stretched across the steering wheel.

Any type of multitasking or even day dreaming can cause people to lose focus, like the driver Turner pulled over Tuesday afternoon traveling 85 miles per hour in a 70 mph zone on Interstate 185.

Raines added even the now “common place” actions inside a moving vehicle can be a recipe for disaster.

“People get distracted by their cell phones, texting, fiddling with the radio or parents reaching back to tend to their child. It’s now an epidemic we deal with on a yearly basis,” he said.

The LaGrange Police Department said they too witness distracted driving on the roadways, but admitted it can be hard quantify how many collisions their officers investigate fall into that category.

According to LPD Lt. Mark Kostial, in 2015 LPD responded to 2,299 vehicle crashes and issued more than 14,000 traffic warnings and citations.

He said while that number may be high, their officers are trained to take a more proactive approach to preventing potential car accidents and fatalities.

“Imagine what these numbers would be if our officers did not take such a proactive approach to traffic enforcement,” Kostial wrote in an email to the Daily News. “… let’s look at this from a different perspective. Within the City of LaGrange we typically average more traffic fatalities than homicides each year, and more motor vehicle collisions than homicides, rapes, robberies, aggravated assaults, burglaries, thefts, motor vehicle thefts, and arson offenses combined.”

Troopers at Post 2 are also ramping up their efforts to enforce traffic laws on the county’s interstates and roadways.

“My troopers will be looking for people not completely stopping at stop signs, following too close to the car ahead of it or speeding through a yellow light instead of using caution and stopping. The yellow light is to slow down, not speed up,” Raines said.

He added if caught, drivers could face fines ranging from $1 to $1,000 — which is determined by a judge.

“It’s up to (the judge’s) discretion,” Raines explained. “But the public needs to know my troopers are set to enforce the laws pertaining to distracted driving. Please don’t take that chance.”