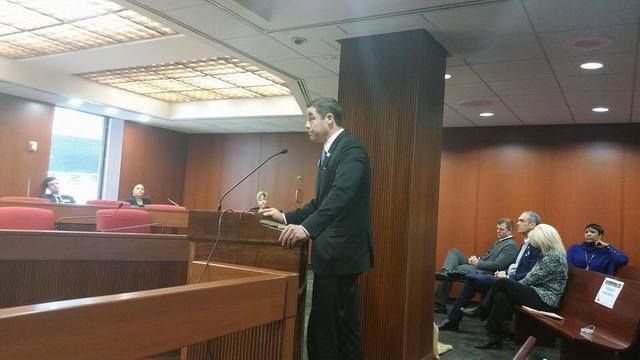 Dale Jackson skipped away from the capitol Monday afternoon with Ava, 9. Jackson said the little girl suffers from a severe form of seizures and would also benefit from HB 722.

http://lagrangenews.com/wp-content/uploads/sites/37/2016/01/web1_Jackson2.jpgDale Jackson skipped away from the capitol Monday afternoon with Ava, 9. Jackson said the little girl suffers from a severe form of seizures and would also benefit from HB 722.

Dale Jackson testifies Monday before a legislative committee regarding House Bill 722, a new proposal that would add more disorders to an approved list of people able to legally receive cannabis oil in Georgia. HB 722 would also add cultivation labs and dispensaries for medical marijuana in the Peach state.

http://lagrangenews.com/wp-content/uploads/sites/37/2016/01/web1_Jackson1.jpgDale Jackson testifies Monday before a legislative committee regarding House Bill 722, a new proposal that would add more disorders to an approved list of people able to legally receive cannabis oil in Georgia. HB 722 would also add cultivation labs and dispensaries for medical marijuana in the Peach state.

Dale Jackson testified before a judiciary committee in the state House of Representatives. He and his group are currently looking over House Bill 722 and wanted feedback from parents hoping to help more children that could benefit from homegrown cannabis oil.

“I told them every night my son goes to sleep, gently rocking his head and thumping it against the wall,” Jackson told the Daily News by phone. “My wife and I can hear it. It’s almost rhythmic and soothing for him. But we fear, when will that become violent? What if it goes from soothing to banging his head against the wall?”

Jackson’s son Colin, 7, has a severe form of autism that leaves him unable to speak or communicate with his family, dress himself or perform simple, everyday tasks like brushing his teeth, Jackson said.

He said other parents testified Monday their autistic children went from being calm to very violent almost overnight. Jackson fears the same may happen to Colin —which is why he and other supporters, known as Hope United, are drawing a line in the sand this year when it comes to passing HB 722.

Jackson said while the passage of Haleigh’s Hope Act last year, legalizing medical marijuana in the state of Georgia, helped more than 500 people out; it still left a gaping hole for a number of adults and children with disorders not on the approved list.

Those disorders that did not make the list included: Autism, Fibromyalgia and PTSD.

Jackson stated even those that are able to legally receive cannabis oil in Georgia are not getting the quality of medicine they need – and are also obtaining it at high risk.

“Parents are sick and tired of having to ship in inferior medicine illegally, or go to another state and bring it back illegally to treat our children,” he said. ““Even if they add autism to the bill, legislators are going to make me a felon to try and get it – so it’s not realistic for me to obtain it … I told the committee, ‘Please don’t make me become a felon. Because we are not going to wait another year for them to pass it. We’ll have to go get it (cannabis oil) ourselves.’”

Jackson said while Haleigh’s Hope Act made medical marijuana legal in Georgia, it is still illegal to bring the cannabis oil across state lines. With no dispensaries in the state, parents risk breaking state and federal laws just to help their child.

But it is a risk Jackson said he does not even get the chance to take for his son.

“You have no idea how painful it is to hear from a number of people that contact me on a daily basis about an autistic child that took cannabis oil and gained the ability to talk,” Jackson continued. “I cannot describe the level of pain that causes me not to allow my son to have that chance at all to try cannabis oil, all because of the fear of DFACS coming and taking all our children away.”

The majority of HB 722 centers around allowing companies to cultivate marijuana in Georgia with the intent to distribute it for medicinal purposes only.

If passed, Jackson said the bill would authorize state officials to issue between two to six licenses for companies to grow marijuana plants. But those same companies would also be responsible for processing the extract and distributing the cannabis oil as well.

Jackson said the cultivation companies would have to hire a pharmacist and staff them at the facility. The pharmacist would be the only person allowed to sell the medical grade marijuana to legalized card holders in the state of Georgia.

He hopes Colin is one of those cardholders after this year’s legislative session.

“He is limited physically to a degree, but we can deal with that. Everything boils down to communicating. Even if he didn’t speak, but gained an ability to communicate in any way, that would be life changing for us,” Jackson said. “Even if the cannabis oil doesn’t help, I’m his dad and I deserve to try. No one still cannot list one single negative side effect regarding autism, so let me try it.”

Jackson said he drew a line in the sand Monday and plans to stand firm on helping pass HB 722.

He will continue to visit the capitol on a weekly basis during the legislative session – and will testify again before the Senate committee.

Jackson wants to use his voice as a reason for change – a voice he hopes Colin will someday have too.