Parents push for clean up for Granger playground 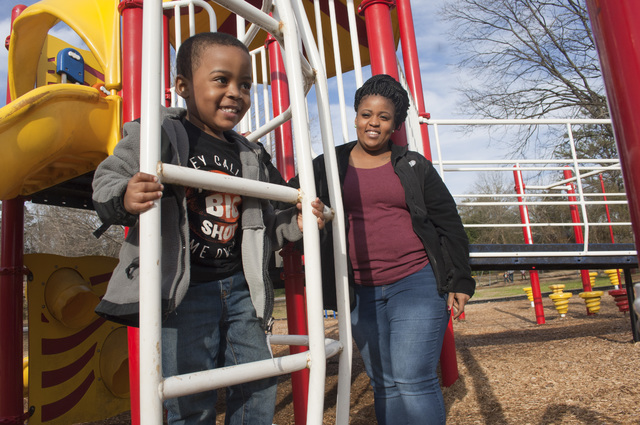 Deatrice Rutledge, right, watches her son Urban Rosser, 3, play at Granger Park on Monday. A group of flower streets residents approached the Troup County Parks and Recreation Commission on Monday to ask for improvements to the park, including fixing broken equipment and painting over grafitti.

http://lagrangenews.com/wp-content/uploads/sites/37/2016/01/web1_GrangerPark01WEB.jpgDeatrice Rutledge, right, watches her son Urban Rosser, 3, play at Granger Park on Monday. A group of flower streets residents approached the Troup County Parks and Recreation Commission on Monday to ask for improvements to the park, including fixing broken equipment and painting over grafitti.

That’s what some residents of the flower streets neighborhood see when they visit the playground of Granger Park, which Mayor Jim Thornton once called “the crown jewel” of the LaGrange parks system.

At Monday’s meeting of the Troup County Parks and Recreation Commission, Lakewood Drive resident John Roberts came representing his neighbors and their concerns. Prepared with a slide show presentation, Roberts told commissioners at their quarterly meeting at the Mike Daniel Recreation Center about the problems he and his neighbors see — and offered solutions.

“We all love Granger Park,” he said. “And it’s used by a lot of people, but there’s broken glass at the entrance of the playground, the garbage cans are in poor condition and the equipment is starting to show its age.”

Roberts explained that he and his neighbors would like to see the park more well maintained and brought back to the condition once enjoyed by residents from across the community.

In fact, there is a plan, remarked Speer Burdette, a member of the parks commission and the president of the Callaway Foundation.

“The bad news is we don’t know the timetable,” Burdette said.

The plan, according to city officials, is a massive overhaul of the park that would include the addition of trails, possibly new parking lots and a general sprucing-up of the complex — but it’s not as simple as putting down new mulch and replacing trash cans.

With so many entities involved in the park, the source of funding for its overhaul hasn’t been decided and the Granger Park master plan is in limbo, according to Leigh Threadgill, city planner. That’s not to say it won’t happen, she said, but sometimes the wheels of government turn slowly.

In the meantime, Dan Wooten, director of the county’s parks department, said his crews are working through their “winter check list,” he said, and plan to make it to Granger Park soon to provide some general maintenance.

Other parks commissioners offered more solutions that won’t fix everything, but could address some of Roberts’ concerns, such as possibly moving the recycling station away from the entrance of the playground to prevent broken glass from making its way onto the playground.

As far as the larger overhaul of the park, one of the hold ups is finding a source of long-term funding for maintenance, commissioners noted.

In the short term, officials have suggested a community fundraising effort to provide some of the quick fixes to the playground. In many communities across the state, residents have established “friends of the park” organizations that help provide routine maintenance and support for parks, Threadgill said.

Burdette remarked at Monday’s meeting that any overhaul of the park should be part of a larger plan to improve Granger Park.

“A lot of this is in the planning phases,” he said. “But it needs to be part of a larger project.”