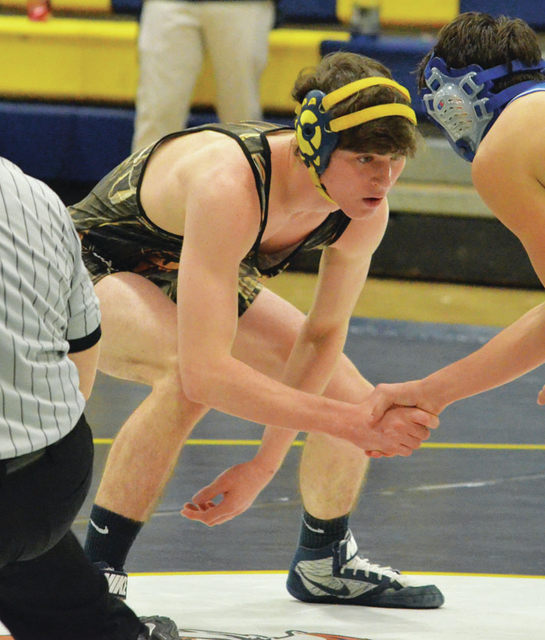 The Troup wrestling team gets together after winning the county championship last week. Troup will look for more success on Saturday when it competes in the area tournament at Woodward Academy. Kevin Eckleberry | Daily News

http://lagrangenews.com/wp-content/uploads/sites/37/2016/01/web1_troup2-2.jpgThe Troup wrestling team gets together after winning the county championship last week. Troup will look for more success on Saturday when it competes in the area tournament at Woodward Academy. Kevin Eckleberry | Daily News

Troup’s Chase Seals, who reached the state finals last year as a freshman, will try to win an area championship on Saturday. Kevin Eckleberry | Daily News

http://lagrangenews.com/wp-content/uploads/sites/37/2016/01/web1_Troup-seals2.jpgTroup’s Chase Seals, who reached the state finals last year as a freshman, will try to win an area championship on Saturday. Kevin Eckleberry | Daily News

Troup’s Jeremiah McClendon, a state finalist last year, will try to make it back to state this year by finishing in the top four at the area tournament. Kevin Eckleberry | Daily News

http://lagrangenews.com/wp-content/uploads/sites/37/2016/01/web1_Troup-mcclendon.jpgTroup’s Jeremiah McClendon, a state finalist last year, will try to make it back to state this year by finishing in the top four at the area tournament. Kevin Eckleberry | Daily News

LAGRANGE – There will be 14 Troup High wrestlers competing in Saturday’s area tournament at Woodward Academy.

If everything goes according to plan, all 14 of those wrestlers will be returning to practice on Monday with another match to prepare for.

There will be seven teams competing in the Area 5-AAAA tournament on Saturday, and the top four finishers in each weight class will earn an invitation to the state sectional next week.

The top eight finishers at the state sectional will then qualify for the state finals that will be held at the Infinite Energy Arena in Duluth.

Before Troup’s wrestlers can start thinking about the state tournament, they’ll have to make sure they get the job done on Saturday.

“Geting them through to the sectional, that’s the main thing,” Troup head coach Craig Garner said. “First and foremost, the goal is to qualify top four and get to state.”

Since winning the county championship in dramatic fashion last week, the Tigers have been polishing things up in the wrestling room in preparation for Saturday.

Troup was supposed to participate in a tournament last weekend, but it was canceled because of concerns over winter weather.

“We were hoping to get back on the mat right after the county championship,” Garner said. “We had a couple of kids that had dropped down a weight class, and we wanted to get them some matches, at that lowest weight. We really didn’t want the area to be the first time they wrestled at that lowest weight.”

Instead, Troup has worked diligently in the practice room, making sure every wrestler is at his best by the time Saturday’s competition gets under way.

Garner said at the moment, it’s a balancing act between getting the necessary work in, and making sure everyone is healthy and fresh for these next few crucial weeks.

“It’s condensed down to a pretty standard practice plan,” Garner said. “We’re going to get warmed up, we’re going to get our takedown work, a little conditioning at the end, and we’ll mix in a little live. We’re trying not to go live as much right now, just for the sheer fact of staying injury free.”

The last time the Tigers had a competition, they celebrated a dramatic victory over the LaGrange Grangers in the county championship.

Troup trailed 27-9 at one point, but it rallied for a 36-33 victory, with Brantly Robinson winning the final match to give his team the decisive three points.

One of the biggest wins of the night was provided by the only Troup senior who’ll be wrestling on Saturday, Hudson Newton.

In the 285-pound match, Newton was matched up against LaGrange’s Emmanuel Mann in a showdown between two wrestlers who hadn’t lost all season.

It wasn’t just about the points.

It was a key moment in the comeback, and Robinson called it “a big momentum-changer.”

“Everybody was excited,” Robinson added. “The wrestlers, the fans, the coaches, everybody.”

Colby Harry began the comeback by winning by decision at 220 pounds, and after Newton’s big win, Trevor Upchurch, Chase Seals and Robinson each won to give Troup the three-point win.

Jeremiah McClendon and Scott Hicks were also victorious for the Tigers.

It was a heck of a home finale for the team’s seniors, including Newton.

“It was one of the best matches I’ve ever been a part of,” said Newton, a state placer last season.

Troup’s other senior, Hunter Wood, had been out of action for more than six weeks when he returned for the county championship and lost a tough match to LaGrange.

Wood injured his elbow in practice in late November, and he missed most of the season before getting a chance to wrestle one final time on his home floor.

Unfortunately for Wood, his match against LaGrange’s Dijon Hart was his final one.

Wood, who participated in the state sectional last year, was in line to wrestle in the area tournament after winning a wrestle-off in practice, but with his elbow still bothering him he won’t compete on Saturday.

Troup’s remaining wrestlers are all underclassmen, including Seals, Upchurch, Robinson and McClendon, who all made it to the state finals last year.

One of Troup’s other top wrestlers this season has been Hicks, a sophomore who has an outstanding record, and his pin in the county championship gave his team six crucial points.

Freshman Steven McClendon has also had a big season, and he won a tournament at Whitewater High, and Colby Harry was third in the Gary Silva Invitational.

Other key members of Troup’s lineup throughout the season have been Trey Harris, Quenton Kersey, Darius Hanson, Colton Greathouse and Dre Flagg.