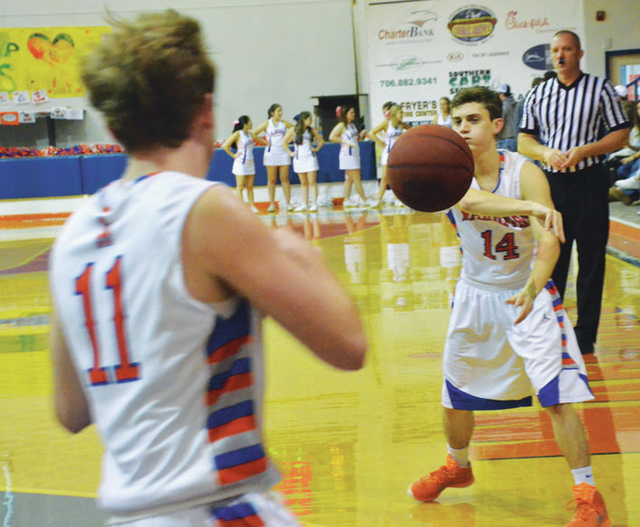 Since losing its season opener, Haralson County (21-1 overall) has won 21 consecutive games, and it has a 7-0 record against Region 5-AAA opponents.

That’s what will be confronting the Callaway Lady Cavaliers tonight as they look to pull off a big home win.

Callaway has been playing pretty well in its own right.

After overwhelming Central-Carroll 56-36 on Tuesday, Callaway (7-8 overall) is tied for second place in the region with a 4-2 record.

Now, Callaway will look to make a major statement by beating a powerful Haralson County team.

“We need to come out Friday and play hard,” Callaway coach Deyano Martin said. “That’ll be a big test.”

The Lady Cavaliers have been passing most of their tests of late.

They struggled a bit early in the season, posting a 2-6 record before beginning their region schedule.

While the record wasn’t that impressive, those early games were against some strong opponents, which Martin believes helped prepare his team for the region games.

“We try to front load the schedule,” Martin said. “The record might not dictate it, but we started getting better and better.”

Callaway began its region schedule with a road win over Central-Carroll before falling to Haralson County 79-47.

Since the Haralson loss, the Lady Cavaliers have won four of five games overall, and they’re in great position in the region with four games remaining.

Martin said he has tried to make things enjoyable for the players this season, and winning games helps.

It helps that the Lady Cavaliers are at full strength.

Callaway had to play its first eight games without senior guard Tanesha Johnson, but she was back for the region opener against Central-Carroll.

Although Johnson only scored six points against Central-Carroll in Tuesday’s win, she has been one of the team’s leading scorers since her return.

Fellow senior Zamari Hardnett has been there since the get-go, and she continued her stellar season by scoring 13 points against Central-Carroll.

While Hardnett and Johnson get it done from their guard positions, sophomore Chyna Cameron has been a force inside, scoring points and pulling down rebounds.

Cameron scored 13 points against Central-Carroll, and as is usually the case, she did a lot of her offensive damage after getting offensive rebounds.

Alexus Scott has also been strong inside for Callaway, and she has been a consistent double-digit scorer.

Martin has made a point to get as many players as possible some time on the court, and he used nine players against Central-Carroll.

One of those players, freshman Qua Beasley, made a 3-pointer at the halftime buzzer to give Callaway a 32-10 lead over Central-Carroll.

“I’ve been letting her play a little bit more due to injuries,” Martin said. “That’ll go a long way for a young player to see a ball go through.”

In today’s boys’ game, it has the look of a mismatch.

Haralson County, conversely, has struggled to a 2-19 record, and it is 1-6 in the region.

Callaway’s teams will be on the road against Cedartown on Saturday as they continue their region schedules.

Also today, Troup’s teams will try to find success against Whitewater in a Region 5-AAAA doubleheader.

In the boys’ game, the Tigers (6-11 overall) will look to improve on their 1-5 region record when they play the Wildcats for the second time this season.

In the earlier game that was played on the road, Troup struggled to a 66-39 loss.

Also today, LaGrange Academy’s teams will return from a week off when they visit Furtah Prep tonight, and Lafayette Christian School’s teams will host Arlington Christian.

LaGrange High’s teams are off today, and they’ll be on the road to face Shaw on Saturday.