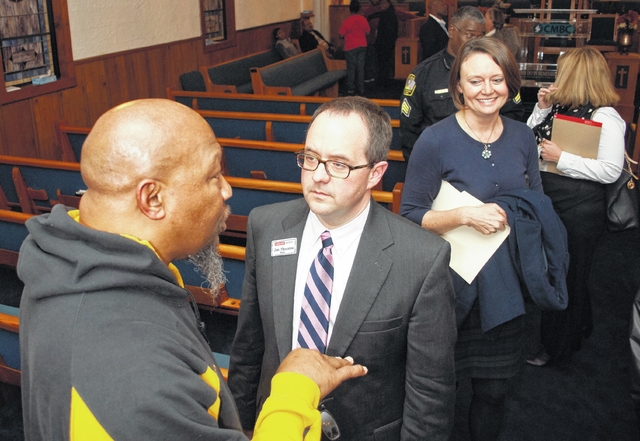 Ernest Ward, left, president of the Troup County NAACP, speaks with LaGrange Mayor Jim Thornton, center, following a town hall meeting Thursday at Confidence Missionary Baptist Church on Colquitt Street. The meeting was the first in a series of four.

http://lagrangenews.com/wp-content/uploads/sites/37/2016/01/web1_TownHall01CMYK.jpgErnest Ward, left, president of the Troup County NAACP, speaks with LaGrange Mayor Jim Thornton, center, following a town hall meeting Thursday at Confidence Missionary Baptist Church on Colquitt Street. The meeting was the first in a series of four.

LaGRANGE — If you want something, you should ask for it.

That was Mayor Jim Thornton’s overarching message Thursday at the first of four town hall meetings, the sequel to four others held this time last year.

A predominantly African-American crowd of about 40 people gathered inside a small Baptist church on Colquitt Street as the 42-year-old, energetic mayor fielded unscripted questions. He listened — and responded — for nearly two hours as residents peppered him with questions about neighborhood blight, economic growth and the future of LaGrange.

For some questions, Thornton, in his first term, had answers. Demolition of the Mansour’s building downtown should happen “probably before April,” he said. State officials expect the Hamilton Road widening project to be done by 2020. The Great Wolf water park project on Whitesville Road is waiting on the state to approve a tax credit, which could come within a few weeks.

Other issues raised were more complex.

“All of these things aren’t going to do me any good if I’m scared to go outside my house at night,” an elderly widow remarked while asking what officials are doing to make the city safer.

“We are in a time when there’s a lot of crime, and it’s violent crime,” the mayor said not only of LaGrange, but the nation as a whole. He noted the decrease in job security seen following the Great Recession and the rise in opioid addiction.

Specifically, the mayor said, the city has grappled with a rise in gang-related violence. In response last year, the city hired four new police officers dedicated to combating the problem — the first time in more than a dozen years the city has created new positions on the police force.

That decision by City Council came after residents voiced concerns at last year’s set of town halls, the mayor said.

A lack of “attractive, affordable” housing was another concern raised by meeting goers. The mayor said the city, along with the Callaway Foundation and a private developer are eyeing the possibility of apartment-style homes closer to the downtown area, possibly in the plot of land where the former Westbrook Tire building stands.

The mayor also said the city has worked to clean up blight and encourage economic growth through the creation of opportunity tax districts. Three such districts exist along Hamilton, Whitesville and Hogansville roads. In those areas, income tax breaks are provided by the state for job creation. For every job created in the district, business owners receive a $3,500 credit that’s good for five years, the mayor noted.

He admitted it wouldn’t fix the problems all together and said there was “no silver bullet,” but initiatives like the opportunity tax districts “chip away at the problem.”

Perhaps one of the most pointed questions of the evening came from Troup County NAACP president Ernest Ward, who challenged the city’s use of utility bills to collect probation fees. The city, which owns and administers local utilities, sometimes tacks on unpaid probation fees to utility bills.

Ward called the move “immoral” and said it potentially punishes other people, such as children, living in a home when someone falls behind on probation fees.

“A whole family should not be penalized because one person doesn’t accept responsibility,” Ward said.

The mayor answered that council passed a measure allowing the practice before he was serving in elected office, but vowed to review the practice. Thornton also said the measure was never meant to be punitive, but was aimed at keeping people out of jail.

Throughout the entire listening session, the mayor continually implored people to be more active in local government. He noted that attendance at City Council meetings is dismal and he wished more people were active in suggesting the future of the community.

“I think it’s important for the community to have a buy in, and to take ownership,” he said. “The problems shouldn’t be solved from the top down.”

Last year, he said, many residents during town hall meetings brought up the Hamilton Road widening project, curbside recycling and a need for more parks and green space.

Today, acquisition of the right-of-way for the Hamilton Road project is set to begin this summer, curbside recycling starts Monday and the city has contracted with a firm to investigate a network of parks connected by bike trails.

“These things matter,” he said. “When you give suggestions, we take it seriously.”

The mayor’s next town hall meeting is slated for Tuesday at 6 p.m. at Hollis Hand Elementary School, 641 Country Club Road.