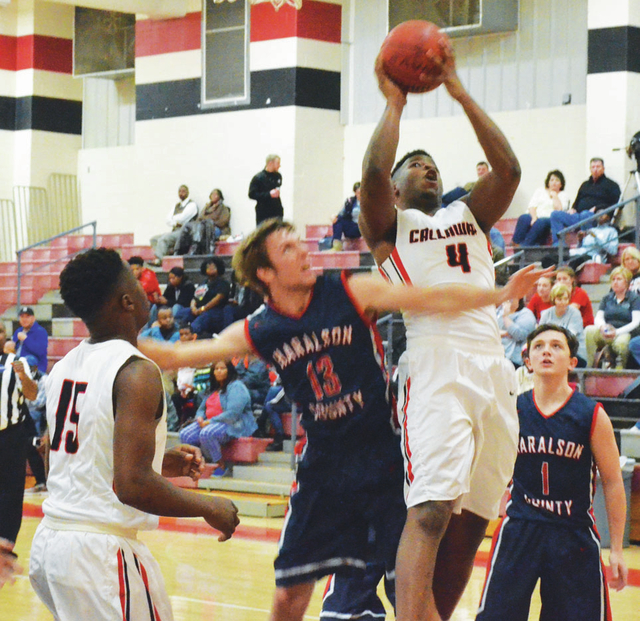 HOGANSVILLE – The first time Callaway and Haralson County played, it was no contest.

Playing on its home floor, Haralson County rolled to a 79-47 victory in a Region 5-AAA girls’ basketball game.

On Friday, those same two teams played again, this time in Callaway’s gym, and it was a much more competitive game.

Callaway was within 10 points with less than two minutes to play, but Haralson County hung on for a 66-52 victory.

If there’s a third meeting between the two teams, it would come in the region tournament, perhaps in the championship game.

For the moment, Haralson County is standing at the top of the mountain in the region.

Haralson County (22-1), which has won 22 consecutive games overall, is 8-0 in the region, and it will be the top seed for the region tournament.

Callaway (7-9) is 4-3 in the region, and it still has a great chance to earn the second seed for the region tournament.

In Friday’s game, the Lady Cavaliers did an excellent job of fighting back from a slow start to make a game of it.

Haralson County was hot early, and it led 23-11 after the first quarter.

In the second quarter, Tanesha Johnson scored eight points as Callaway outscored Haralson County 18-16 to make it a 39-29 game at the half.

Callaway continued to surge in the second half, and when Johnson scored with 1:58 left in the third quarter, Haralson County’s lead was down to 46-41.

Claire Robinson answered with a 3-pointer for Harason County to push the lead back to nine, and by the close of the quarter, Callaway trailed 51-43.

The Lady Cavaliers hung around in the fourth quarter, but they were never able to get any closer than eight points.

“We missed a few baskets at point-break range, and they had a couple of lucky threes off the glass,” Martin said. “Sometimes they get the right bounce. A couple of times down I thought we got fouled and they weren’t called, but there’s no point in crying about it.”

There was no suspense in the boys’ game.

The Cavaliers had a huge first quarter, putting 41 points on the board to build a 31-point lead, and they rolled to a 98-23 win.

The Cavaliers (14-3 overall) maintained their position atop the region standings with a 7-0 record.

Callaway’s teams will be on the road against Cedartown today for a Region 5-AAA doubleheader.