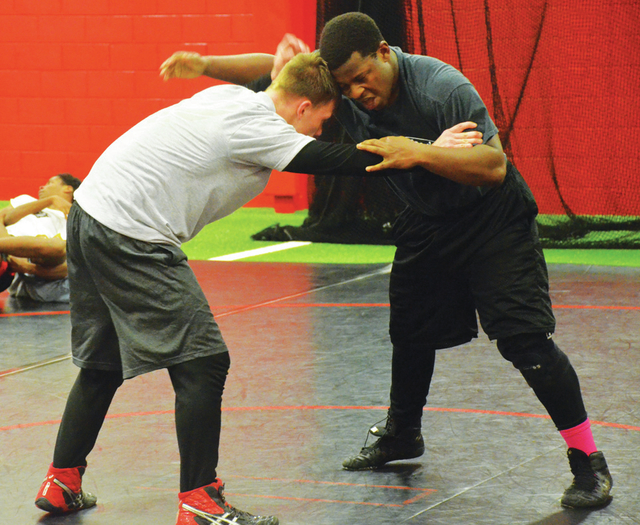 It was a successful day for the Callaway High wrestling team, which finished fourth in the area tournament and had nine wrestlers advance to the state sectional. Contributed photo

http://lagrangenews.com/wp-content/uploads/sites/37/2016/02/web1_CHS-wrestle.jpgIt was a successful day for the Callaway High wrestling team, which finished fourth in the area tournament and had nine wrestlers advance to the state sectional. Contributed photo

ROME – With Justin Kiss continuing his stellar sophomore season with another championship performance, the Callaway High wrestling team had a big day at the Area 5-AAA tournament on Saturday at Pepperell High School.

Kiss came into the tournament with a 23-0 record, and he added to that by winning the area championship in the 106-pound division.

Now, the unbeaten Kiss will look to continue his dominance on the state level.

Kiss, along with eight of his teammates, will compete in the Class AAA state sectional this week.

There will be 16 competitors in each weight division, and the top eight finishers will advance to the state finals the following week.

As a freshman, Kiss not only reached the state finals, but he he ended up placing.

“He’s been there before,” Ghobadpoor said. “He knows what to expect.”

Kiss wasn’t the only Callaway wrestler to return home with a title on Saturday, with Khaliq Swift taking top honors in the 138-pound division.

Senior Brandon Boddie, who is in his first season wrestling, was third in the 220-pound weight class, and Jason Freiberg (132 pounds) and Nick Trammell (182 pounds) each finished fourth.