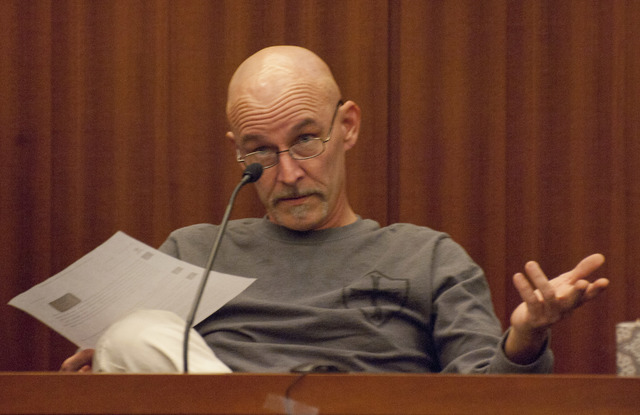 Richard C. Wolfe, right, shows a jury a photograph in Troup County Superior Court on Tuesday of work the housing nonprofit DASH, which he chairs, did at the Dunson Street school that is now apartments for senior citizens. Wolfe is suing a local blogger for libel after the blogger claimed he stole money from DASH.

http://lagrangenews.com/wp-content/uploads/sites/37/2016/02/web1_LibelLawsuit03WEB.jpgRichard C. Wolfe, right, shows a jury a photograph in Troup County Superior Court on Tuesday of work the housing nonprofit DASH, which he chairs, did at the Dunson Street school that is now apartments for senior citizens. Wolfe is suing a local blogger for libel after the blogger claimed he stole money from DASH.

Ron J. McClellan gestures while on the witness stand Tuesday in Troup County Superior Court. McClellan is being sued by a former county commission chairman for libel.

http://lagrangenews.com/wp-content/uploads/sites/37/2016/02/web1_LibelLawsuit02WEB.jpgRon J. McClellan gestures while on the witness stand Tuesday in Troup County Superior Court. McClellan is being sued by a former county commission chairman for libel.

LaGRANGE — Closing arguments and jury deliberation are expected today in a libel lawsuit brought by a former county commissioner against a local blogger.

Richard C. Wolfe, chairman of the Troup County Board of Commissioners from 2007 to 2014, is suing Internet blogger Ronald J. McClellan, 55, of West Point.

During opening statements Tuesday, Thomas E. Greer, a Carrollton attorney representing Wolfe, told jurors McClellan has a right to question public officials, but he “crossed the line” when he accused Wolfe of felonies.

“We believe Mr. McClellan will admit that he made these accusations and that he knew that he was accusing Mr. Wolfe of serious crimes that he had absolutely no evidence to support,” Greer told jurors.

He went on to say McClellan was motivated by an obsessive personal vendetta and a “desire to destroy Mr. Wolfe’s reputation and the reputation of DASH,” an affordable housing nonprofit that Wolfe created and chairs.

Greer noted that he and Wolfe sent McClellan a letter before filing suit asking him to retract his statements. McClellan, in response, hand wrote in bold print “kiss my ass, Ricky” on the letter before returning it.

McClellan said in his opening statement that he “has no clue” what he was doing while representing himself. He repeatedly claimed Wolfe “has DASH money sitting in a Swiss bank account,” and said that while posting online about Wolfe, he was trying to “draw him out, just like I do with other politicians.”

At one point, McClellan brought up a political action committee with which Wolfe was involved in 2012 called Citizens for the Future of Troup County. McClellan accused the PAC of being a “smear campaign,” to which Wolfe’s attorney objected and asked the presiding judge, Jack Kirby, to direct McClellan to address the matters of the trial only.

“Do you want me to shut up?” McClellan asked the judge. “Is that what you’re saying?”

After opening statements, Greer called McClellan to the witness stand where he asked him about the online posts made by McClellan. McClellan did not deny making any of the statements, rather at times doubled down.

“‘Charitable causes are very popular with scammers like Ricky Wolfe,’ do you remember making that statement, Mr. McClellan?” Greer asked. “Is that your position today?”

“I have no proof, no smoking gun, but I have evidence of reasonable suspicion,” McClellan answered.

Greer’s examination of McClellan lasted about two hours, during which McClellan appeared to grow increasingly hostile. He was directed several times by the judge to answer questions directly, under threat of being held in contempt of court.

After a recess for lunch, Greer called Wolfe to the stand where Wolfe told his story of growing up in the Dunson neighborhood of LaGrange and returning after retirement in 1997 to find his old neighborhood in disrepair. He eventually catalyzed to form the housing nonprofit DASH in 2002.

Today, DASH has impacted as many as 1,000 of LaGrange’s 11,000 homes and has provided $46 million in property value to the community, Wolfe testified.

Although McClellan accuses him of embezzling and converting public funds from DASH, Wolfe testified that he receives no compensation for his chairmanship of the nonprofit and has only turned in one reimbursement for travel.

Wolfe also testified that he decided to sue McClellan because he felt McClellan had gone too far in accusing him of crimes.

“I don’t have to take that,” Wolfe said.

Wolfe also went on to note that “civility is gone in our society today,” and that he feels people make accusations with a false sense of impunity.

When McClellan cross examined Wolfe, he asked Wolfe why he didn’t respond to any of his posts online.

“The tone of your language was not worthy of me responding,” Wolfe said.

Closing arguments are expected today and jurors are then expected to deliberate if damages should be awarded, and if so, how much.

Read LaGrange Daily News online and in print for updates on this and other stories.