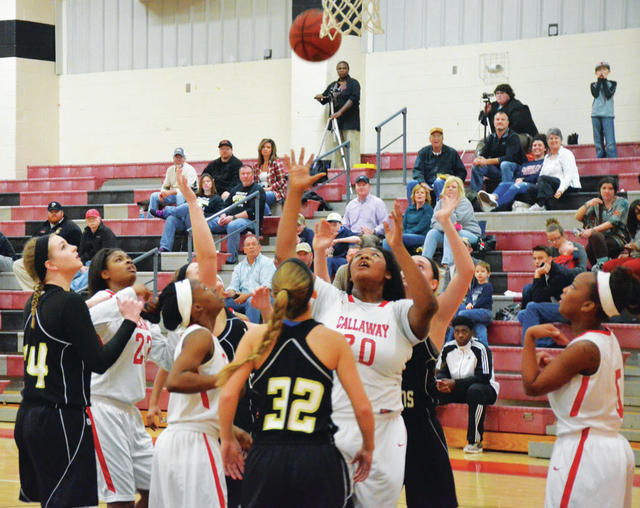 Callaway’s Chyna Cameron and her teammates wait on the ball to come down during a game against Pepperell earlier this season. In the rematch on Tuesday, Cameron scored 16 points to help Callaway win 56-49. Kevin Eckleberry | Daily News

http://lagrangenews.com/wp-content/uploads/sites/37/2016/02/web1_CHS-cameron2.jpgCallaway’s Chyna Cameron and her teammates wait on the ball to come down during a game against Pepperell earlier this season. In the rematch on Tuesday, Cameron scored 16 points to help Callaway win 56-49. Kevin Eckleberry | Daily News

LINDALE – It was a big night for Callaway High’s basketball teams.

In the girls’ game on Tuesday, Callaway beat Pepperell 56-49, and that win wrapped up the number two seed for next week’s Region 5-AAA tournament.

In the boys’ game, it was Callaway rolling to a 65-49 win to sew up the number one seed for the region tournament.

Both of Callaway’s teams have byes into the semifinals of the region tournament, meaning they’ve both already qualified for the state tournament.

The Callaway girls’ team completed a season sweep of Pepperell to improve to 6-3 in the region, and it will finish second no matter what happens in Friday’s regular-season finale against Rockmart.

“It was a complete team effort,” Callaway head coach Deyano Martin said. “In a big game like that where you come into somebody else’s house and win, that’s huge. The crowd was rocking.”

The Lady Cavaliers started quickly, surging to a 16-9 lead after the first quarter, and they led 30-22 at the half.

Tanesha Johnson led the first-half charge for Callaway with 12 points, and she made a pair of 3-pointers in the first quarter.

With Chyna Cameron scoring six points in the third quarter, Callaway outscored Pepperell 10-6 to take a 40-28 lead into the final period.

Pepperell hung around in the fourth quarter but never came any closer than five points.

KiKi Owens contributed 13 points, and eight of those points came in the fourth quarter when she was 4-of-6 from the free-throw line.

Alexus Scott scored seven points, and she pulled down 16 rebounds.

While Zamari Hardnett wasn’t a major contributor on the offensive end, Martin said she came up big on defense while guarding Pepperell’s leading scorer, Madison Wilder.

Wilder had 17 points and made three 3-pointers, but she scored 27 points in the earlier game against Callaway.

“Zamari played man-on-man on her, and she did a great job,” Martin said.

Any hope Pepperell had of beating Callaway ended in the third quarter, though.

The Cavaliers outscored the Dragons 25-8 in the third period, giving them a 50-26 lead as the final quarter began.

It was another blowout win for the Cavaliers, who have enjoyed a double-digit margin of victory in all but one of their region games.

Callaway can finish the regular season with a perfect region record for the second straight year if it beats Rockmart at home on Friday.