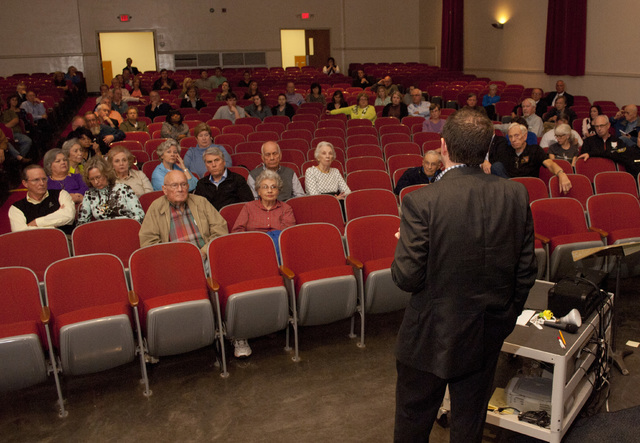 LaGrange Mayor Jim Thornton, standing, addresses a crowd during a town hall meeting Tuesday at Hollis Hand Elementary School. It is the second of four listening sessions held by the mayor.

http://lagrangenews.com/wp-content/uploads/sites/37/2016/02/web1_TownHall01WEB.jpgLaGrange Mayor Jim Thornton, standing, addresses a crowd during a town hall meeting Tuesday at Hollis Hand Elementary School. It is the second of four listening sessions held by the mayor.

LaGRANGE — Attendees of Mayor Jim Thornton’s second of four town hall meetings Tuesday wasted no time getting to their point.

Sitting in Hollis Hand Elementary School’s auditorium, they resoundingly voiced their unease about a controversial proposal to build a thoroughfare connecting Vernon and Country Club roads.

“There’s a feeling that this road was decided behind closed doors,” he said. “It seems this road would primarily benefit private developers and public money would be used to pay for it.”

The road, dubbed the northwest connector, would connect Vernon Road near Medical Park Drive to Country Club Road near the entrance of the Highland Country Club community. Right-of-way for the road is slated to be donated by the Callaway Land Trust, which owns the land, along with $2 million from the Callaway Foundation toward the estimated $4.5 million. The remaining balance would come from SPLOST — special-purpose, local-option sales taxes.

Cox went on to note that he and other opponents of the road have attended City Council and County Commission meetings and have been “met with deafening silence” from public officials when an attorney representing them posed questions.

The mayor, an attorney by trade, countered that he believes there has been dialogue with residents about the road. He said he’s met privately with many residents and sent a “lengthy” email that circulated around concerned residents.

Thornton also said he and other elected officials did not respond directly to concerns at City Council meetings because the group was represented by an attorney and the comments came “under a veiled threat of litigation.”

He continued, and suggested that “rather than having a lawyer come,” residents should attend City Council meetings and continue dialogue to discuss solutions.

“We have tried to participate in the process you’re describing,” Cox said. “And yet, we got nowhere.”

Edna Foster of Vernon Woods Drive said she questioned the need for the road and drew the first applause of the night from the crowd when she asked if the northwest connector “was the right project.”

Dr. Charles Ferguson, another attendee of the meeting, asked the mayor if in the future SPLOST funds could be earmarked for specific projects, similar to the way education SPLOST funds are planned.

“Yes, it is possible,” the mayor answered. “The question is, is it advisable.”

The mayor noted that growth in a community can change rapidly and projects planned years prior may not be needed in the future — and likewise, unforeseen projects happen.

“I will commit to this: the city component of the next SPLOST will be constructed by citizens in an open process,” the mayor said.

“Where were all the underlying facts and data that pointed to this road?” he asked.

Thompson suggested the city invest in a comprehensive traffic study.

Perhaps the most pointed question of the evening came from Charles Wardlaw of Country Club Drive.

Prefacing his question by saying he was not “going to be politically correct,” Wardlaw asked the mayor point blank, “If Callaway (Land Trust) didn’t give you that land, would you be as strong about it as you are? Would you do it? SPLOST funds are generated by the public for public use. Not to benefit special interests or individuals. To me, that’s a fundamental issue.”

“I would not be as strong about it,” Thornton answered. “What I would actually say is that this (road idea) is nothing new. The idea of having a connector road is nothing new. It’s been talked about for years and a lot of that was before I was even on City Council. There’s history there. The fact that that’s a desire is nothing new.

“To your point,” the mayor continued, “the question is how do you best leverage public resources. … Quite honestly, you could make the argument that when you have a private land owner that is willing to donate right-of-way and assist in construction of the road, you’re taking public resources and putting them through a multiplier.”

Although the northwest connector dominated the majority of the two-hour town hall, it wasn’t the only topic raised.

Parents and grandparents raised their hopes for the revitalization of Granger Park and Laura Breyfogle of Springdale Drive drew the second applause of the evening when she thanked the mayor and council for their support and creation of a curbside recycling program that launched Monday.

The mayor’s next town hall meeting is set for Thursday at 6 p.m. at the Troup County Baptist Association, 1301 Washington St.