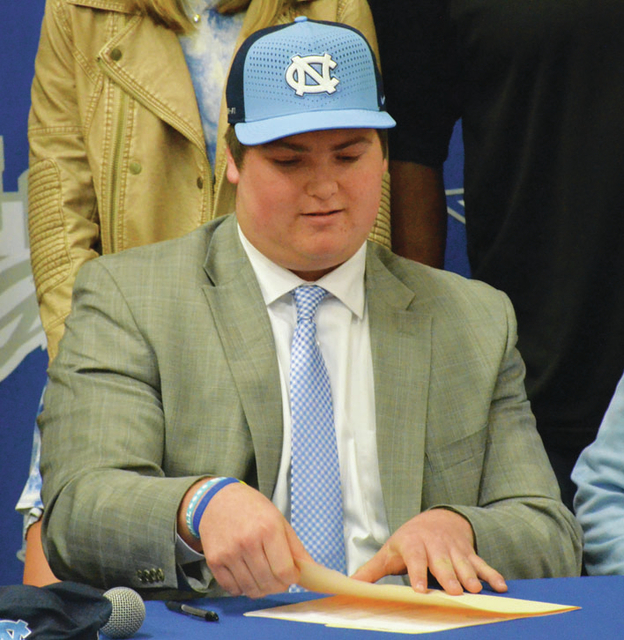 LaGrange High’s Luke Elder chooses between three different hats, all with the North Carolina logo. Elder committed to North Carolina in June, and on Wednesday he signed with the Tar Heels. Kevin Eckleberry | Daily News

http://lagrangenews.com/wp-content/uploads/sites/37/2016/02/web1_LHS-elder.jpgLaGrange High’s Luke Elder chooses between three different hats, all with the North Carolina logo. Elder committed to North Carolina in June, and on Wednesday he signed with the Tar Heels. Kevin Eckleberry | Daily News

LAGRANGE – Luke Elder had a pretty important task to take care of before the school day began.

Elder, a senior at LaGrange High, verbally committed to North Carolina in June, but nothing was official until national signing day, which was Wednesday.

He filled out the signing form and sent it to North Carolina head coach Larry Fedora.

With that, Elder was part of North Carolina’s 2016 signing class, and he’ll be a member of the football team this fall.

“I took a picture of it this morning at 7:30 and sent it in,” Elder said of the signing form. “Immediately coach Fedora and (offensive line coach coach Chris Kapolovic) called me back and just congratulated me, and said we’re glad you’re a Tar Heel.”

The feeling is mutual.

Elder, who during his time at LaGrange became a highly recruited offensive lineman, has known for a while that North Carolina is where he wants to be.

He put an end to the recruiting process in June when he verbally committed to North Carolina, and he hasn’t wavered since then.

“I’m really excited to play for UNC,” Elder said. “The atmosphere, the people, and the school are just amazing. And you’ll get a world-class education. It’s really exciting.”

Elder didn’t rush his decision, and he had plenty of options.

He took a handful of recruiting visits, did his home work, and by early summer he knew where he wanted to go.

“I made my decision back in June,” Elder said. “It was really easy when it came down to it. I chose to go the University of North Carolina. These past few months have been fun, and the recruiting process has been great, but I’m happy to sign.”

Elder added that signing the forms “made it very real.”

Unfortunately for Elder, he spent his final season of high-school football as a spectator.

He suffered a knee injury during the spring game, and he didn’t play at all last season.

When he was able to after the surgery, Elder began the rehab process, and he’ll be 100 percent healthy and ready to go upon his arrival in Chapel Hill.