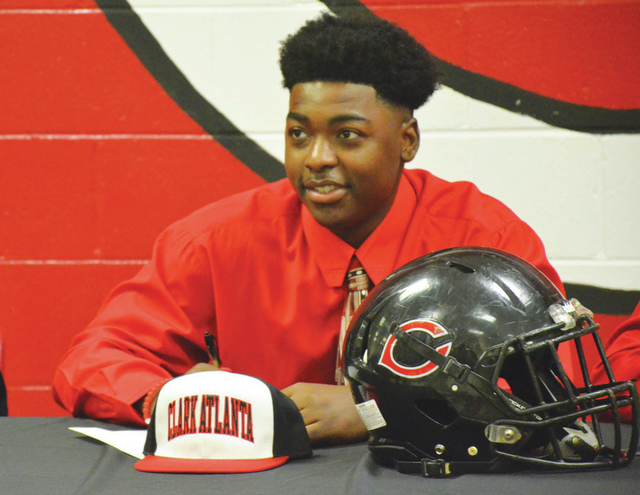 HOGANSVILLE – As Callaway’s Cedric Maynard embarked on his senior season, he wasn’t getting a whole lot of attention from college football programs.

That was about to change.

A backup to Eddie Culpepper in 2014, Maynard became the Cavaliers’ featured running back for his senior year, and he produced a sensational season.

Maynard ran for nearly 2,500 yards in just 12 games with 26 touchdowns, and he made multiple all-state teams.

With numbers like those, the colleges are going to come calling.

One of the schools that expressed an interest in Maynard was Tennessee State University, and that’s where he has decided to go.

“At the end of the season, I started getting more schools looking at me,” Maynard said. “I got a couple of offers, and I chose TSU.”

Maynard made that announcement during Callaway’s signing-day ceremony on Wednesday, and three of his teammates signed their letters of intent as well.

Those players helped the Cavaliers win a region championship and finish with a 10-2 record last season, and head coach Pete Wiggins said they’ll be greatly missed.

All four players made tremendous strides during their time as high-school players, and Wiggins said that didn’t happen by accident.

“They were always here when the weight room opened,” Wiggins said. “When we went to camps, they were always a part of it. To see the progress that they’ve made over the years is a great tribute to their work ethic, and their great attitude.”

For Maynard, it was all about getting a chance to show what he could do.

While he was a backup to Culpepper, he had his share of explosive plays, but he didn’t get many carries.

As a senior, Maynard averaged 21 carries per game, and in the regular-season finale against Central-Carroll and in the two playoffs games, that number went up greatly.

No matter how many times Maynard touched the ball, he never slowed down as he showed he had what it took to be an impact, full-time player.

Maynard had some other offers, but after visiting the Tennessee State campus, he knew that was the place for him.

“I went up there, and I enjoyed everything,” Maynard said. “They treated me like family, and showed me around. They did a lot.”

Maynard said he’ll carry the same work ethic that allowed him to achieve so much on the high-school level to college.

“When I got to TSU, I’m going to go there to the same thing I did in high school,” Maynard said. “I’ll work hard.”

Leverette is grateful to have this opportunity.

Before his junior season, Leverette suffered a broken leg in practice, and he was done for the year.

“I know when it happened, I was really hurt,” Leverette said. “All my recruiting, I thought that was over. Me and my mom, we had a long conversation about it. She said to keep God first, and to keep working, and that’s what I did.”

Leverette, a linebacker, came back and had a productive senior season and was one of the top players on a terrific defense.

The colleges came calling, and Leverette made his decision.

Leverette’s primary contact at Clark Atlanta is linebackers coach Braxton Kelley, who is a former standout at LaGrange High.

“I went to several different schools, and I enjoyed it,” Leverette said. “Clark stood out the most. Coach Kelley, he stayed in touch with me every day, he checked on me every day to make sure I was all right.”

Laye, who was a four-year starter on the offensive line, said he is “very excited” about the prospect of playing college football.

“It means a lot,” Laye said. “You put in so much hard work over four years, and now you’re able to sign, and you know you’re going to go play somewhere next year.”

“I like the academics. I’ll be able to take classes at Georgia Tech,” Laye said. “And a lot of the coaches coached in the NFL, so they know what it takes to get there. I’ll be able to learn from them and become the best player I can.”

Laye said he has also been given the go-ahead by the Clark Atlanta coaches to play baseball if he wants to.

Wortham had a phenomenal senior season from his defensive end position, and he’ll be joining a program that is a national powerhouse in junior-college football.

Wortham said he’ll take a lot of great memories from his time as a Callaway football player.

Wiggins said some more Callaway players will likely be signing in the coming days and weeks.

Wiggins said his main objective is to help the players find the right fit when it comes to a college.

Callaway players who head off to college tend to stay put and succeed, and Wiggins said part of the reason for that is the diligence with which the coaches and players approach the process.

During the 2015 season, Callaway had 18 players on college rosters, and only two programs in Class AAA had more than that.

Cedar Grove had 21 players, and Calhoun had 20.

“We’ve got a great tradition,” Wiggins said. “This year we were ranked third in the state in AAA as far as college players. I think that our kids, they make decisions based on where they think they’ll be successful. That’s a big part of our success.”