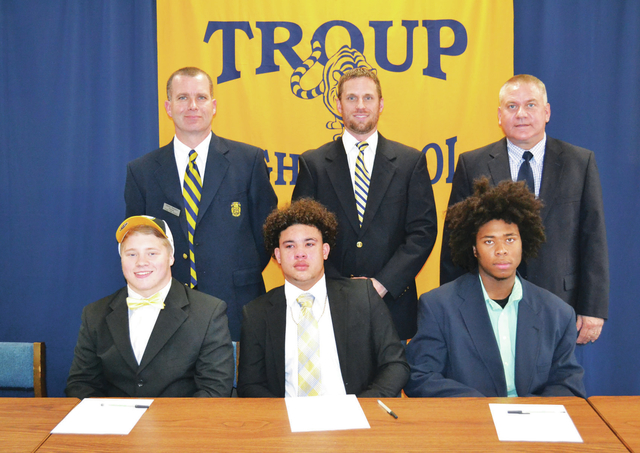 Travis Johnson, one of three Troup High football players who signed a letter of intent on Wednesday, is heading to the upper midwest to play college football.

Johnson, who was a play-maker for the Tigers from his tight-end position the past few seasons, has signed with Crown College, a private Christian school in Minnesota.

The low temperature today in Minneapolis is supposed to be 11 degrees, and an inch of snow is expected.

He’s over-joyed at the prospect of playing college football, and he’s anxious to begin that journey.

“It’s been my dream all my life to play college football,” Johnson said. “And it’s here. I’m just ready to go play.”

Troup linebacker Austin Carter is staying close to home after signing with Point University, and quarterback Dexter Shealey has signed with Georgia Military College in Milledgeville.

Troup head coach Tanner Glisson said some other Troup players will be signing in the coming days.

Johnson’s opportunity came when his highlight package attracted the attention of the folks from Crown College.

“They were looking around for players,” Johnson said. “They got my highlights, and they contacted me.”

How much getting this chance means to Johnson was evident when he was speaking on Wednesday.

The tears flowed freely as the magnitude of the moment struck him.

Glisson said going that far from home will be “a little bit of a culture shock for him, but he’ll be fine. They liked what they saw in him. They thought he’d fit well in their offense as an H back.”

Shealey was a versatile player for the Tigers.

He was the quarterback as a senior, and he was also a defensive back, running back and kick returner during his time at Troup.

That versatility didn’t go unnoticed by the coaches at Georgia Military College.

Shealey will be happy as long as he’s on the field.

“I’m very excited,” Shealey said. “I’m ready to get down there and just play. It’s real big. I’ve been dreaming of this day for a long time.”

“He’ll get to compete against some of the best,” Glisson said. “That’s a big-time program. They are constantly putting people in the SEC. They have several people in the NFL. So he’s looking forward to that.

Carter, who provided a key veteran presence on an inexperienced defense last season, said playing college football is “something I’ve been dreaming of since I was little.”

Carter took a tour of the Point University facilities and got to know the coaches, and he felt that was the right place for him.

“I was really comfortable there,” Carter said. “I know a few guys there, and the coaches are pretty cool.”

Glisson believes the chance to stay close to home was appealing to Carter.

“He had an opportunity to go away from home, but he wanted to stick here and stay at home, and that’s good,” Glisson said.

Glisson said Hudson Newton, Tremayne Tolbert and Mess Bonner are still exploring their college options, and he’s all in favor of them taking their time.

“We’ll probably have three more that will sign in the next few days,” Glisson said. “And I was kind of for that. I don’t want them to rush into that. Because if you’re not ready, you’re not ready. Today is just the beginning of the signing process. If you’re not ready, don’t do it, and tomorrow wake up and say I wish I had waited and thought a little bit more.”