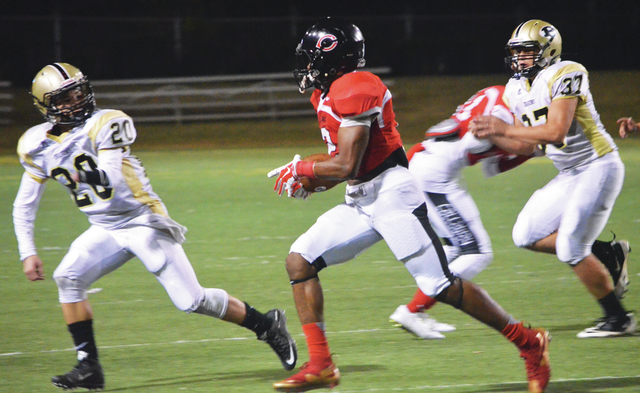 Callaway’s Greyson Lambert chases down a Pacelli player during the first half of Thursday’s game. Kevin Eckleberry | Daily News

http://lagrangenews.com/wp-content/uploads/sites/37/2016/02/web1_CHS2.jpgCallaway’s Greyson Lambert chases down a Pacelli player during the first half of Thursday’s game. Kevin Eckleberry | Daily News

HOGANSVILLE – With a new soccer season less than a week away, the Callaway High girls’ and boys’ teams got out on the field on Thursday to take a test run.

On a frigid evening, Callaway’s teams were taking on Pacelli in a pair of preseason games.

In the girls’ game, the Lady Cavaliers were making their debut under new head coach Kristen Clonts, and they lost 3-2.

In the boys’ game, the Cavaliers gave up two early goals before making a game of it, but they fell short 4-2.

Callaway’s teams will play their first official games on Monday when they host Temple, with the girls’ game starting at 5:30 p.m., and the boys’ game to follow at 7:30 p.m.

Against Pacelli, the Lady Cavaliers took the field for the first time with Clonts and assistant coach Shawna Yawn at the helm.

“One of the PE teachers at the middle school knew they were looking for somebody,” said Clonts, a Paulding County native who recently graduated from the University of West Georgia. “That’s how I came to be here. I love Callaway.”

Clonts said she has enjoyed getting to know all of the players on the team.

In Thursday’s game, Bre Vaught and Savannah Thompson each scored goals for Callaway.

In Thursday’s boys’ game, Pacelli started out quickly, scoring a pair of early goals to surge to a 2-0 lead.

The Cavaliers hung tough from there.

Wesley Brooks had a goal on an assist from Noah Hill, and Jonathan Castillo notched a goal with Cameron Spinks assisting.

Callaway head coach Jake Hembree said he always like to put Pacelli on the schedule because he knows it’ll be a challenging game.

“We know going in we’ll have to play our A game,” Hembree said.

After the rocky start, Hembree said “our guys didn’t drop their heads.”

In addition to the two goals, Hembree said the Cavaliers missed a penalty kick in the first half, and they missed two shots on an open net.

Callaway’s teams will have three games before opening their Region 5-AAA schedules on Feb. 23 at home against Haralson County.