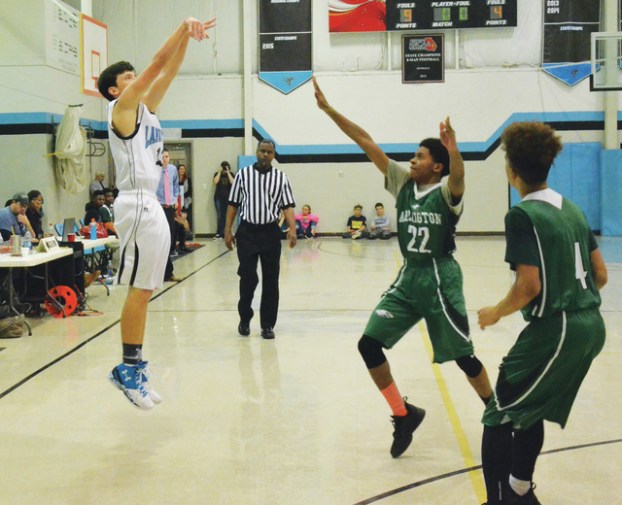 Lafayette Christian School’s Sam Marshall and Josh Shepherd fight for possession of the ball during the second half of Thursday’s 90-61 win over Arlington Christian in the semifinals of the region tournament. Kevin Eckleberry | Daily News

http://lagrangenews.com/wp-content/uploads/sites/37/2016/02/web1_cougars5-1.jpgLafayette Christian School’s Sam Marshall and Josh Shepherd fight for possession of the ball during the second half of Thursday’s 90-61 win over Arlington Christian in the semifinals of the region tournament. Kevin Eckleberry | Daily News

LAGRANGE – They put on a show.

Early in the fourth quarter of Thursday’s region-tournament semifinal game, the homestanding Lafayette Christian School Cougars were clinging to a seven-point lead over Arlington Christian School.

The Cougars (19-0), who’d beaten Arlington Christian handily in the two regular-season meetings, were having a hard time putting a stubborn opponent away.

Any doubt as to the outcome of the game was about to be erased, though.

The Cougars, showing off the skill and explosiveness that has helped them put together an unbeaten season, scored 30 points in the fourth quarter as they turned a competitive game into a blowout.

By the time the final horn sounded, the Cougars had a 90-61 victory, and they’ll host Central Christian at 8:30 p.m. today in the region championship game.

In Thursday’s game, senior Antaveis Sands had a big game for the Cougars with 27 points and nine rebounds, and he made five 3-pointers, with three of them coming in the fourth quarter.

Ross Clifton also had the outside game working with five 3-pointers, and he scored 19 points.

Senior post player Marcus Mobley had his usual stellar all-around game with 19 points and 13 rebounds, and he had seven steals, and Gregory Benefield scored eight points.

Senior point guard Jemi Reed did a terrific job of running the offense with 12 assists, with one of those coming on an alley-oop pass to Mobley during the fourth quarter.

The Cougars were up by 11 points late in the third quarter, but less than a minute into the final period, that lead had shrunk to seven.

Lafayette Christian coach Jarred Pike’s message to that players was that “we’ve got to finish them off now.”

After a Josh Shepherd basket, Clifton hit a 3-pointer less than 30 seconds later to give the Cougars a 65-53 lead with 6:48 left in the game, and they were off and running.

Arlington tried to stem the tide with a basket to get within 10, but Lafayette Christian then went on a 15-2 run to put it away.

The Cougars were up by 21 points when Reed lobbed a pass toward the basket, and Mobley caught the ball and hammered it home to complete the alley-oop.

In a game that was well in hand, it was a little bit of showtime.

“It’s all about the fans,” Reed said. “When we’re beating a team by that much, and we get a chance to show the fans something they don’t usually see, you might as well do it.”

That play was part of an electrifying final quarter, with the Cougars showing off all of their offensive weapons.

They did it from the outside, with Sands and Clifton combining for five 3-pointers, and they got it done from the inside, with Mobley scoring nine points in the fourth quarter.

Sam Marshall and Shepherd also had baskets in the fourth quarter, and for the game, eight different Cougars scored.

“We have a lot of ballplayers,” Mobley said. “Everybody can play. Everyone can score.”

Reed, who does a great job distributing the ball, said “our main goal was to get everybody involved as a team, so we could do it as a unit.”

Lafayette Christian will try to make it 20 wins without a loss when it takes on Central Christian today.

As impressive as the Cougars were on Thursday, Mobley said the team “can play a little better. We had a lot of turnovers. We can bring a little more.”

Also today, the Lafayette Christian School girls’ team will play in the third-place game at 4 p.m. against Arlington Christian.

Lafayette Christian beat Heirway Christian Academy in the first round before falling to Central Christian on Thursday.