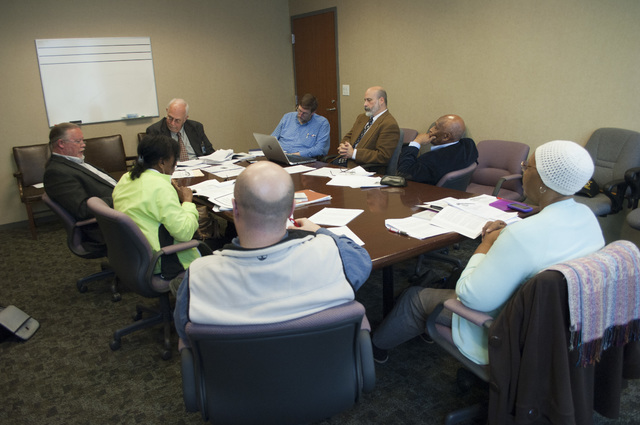 Members of the Troup County Board of Elections and Registration meet at the government center on Ridley Avenue on Thursday. The special called meeting was to discuss possible changes to the board’s bylaws.

http://lagrangenews.com/wp-content/uploads/sites/37/2016/02/web1_BOER01WEB.jpgMembers of the Troup County Board of Elections and Registration meet at the government center on Ridley Avenue on Thursday. The special called meeting was to discuss possible changes to the board’s bylaws.

LaGRANGE — The Troup County Board of Elections and Registration discussed possible changes to its bylaws Thursday during a called meeting at the government center on Ridley Avenue.

Members were split during the discussion, with some asking why a revision of the bylaws was necessary and others calling for the board to have more authority to directly conduct elections.

Randall Hodges, a board member appointed by Hogansville City Council, noted he felt the board has spent more time talking about how their meetings should be conducted rather than conducting any actual business.

Lonnie Hollis, the board’s vice chair and an appointee of the Troup County Democratic Committee, said she felt the board didn’t have enough autonomous authority and once in the meeting called the board “nonfunctioning.”

Regardless of how the board members feel, there are certain things about the board’s functions that can’t be changed, advised Mark DeGennaro, an attorney retained by the county.

He explained there are basically three levels of rules governing the board: state election law, the local act passed by the General Assembly that created the Troup County Board of Elections and the bylaws of the BOER.

BOER members can’t change their bylaws to conflict with either the local act or state elections law.

Ever since the board’s creation, there has been a tinge of controversy. In the summer of 2013, shortly after the board’s creation, the Troup County Board of Commissioners asked an appointee of the Troup County Republican Party to resign from the board. Commissioners cited email correspondence between the member and the former elections superintendent that they said seemed to show a desire to undermine the BOER.

The board, created by the Georgia General Assembly, first met in January 2013 after the Board of Registrars and county elections superintendent position were dissolved and replaced by the BOER.

Some of the suggested changes to the BOER’s bylaws included spelling out the state law regarding removal of members, tweaking the process of how meetings are scheduled and a statement of duties of board members and officers.

No action could be taken at the called meeting, and the board must meet once again to discuss any changes before members can take action at a second regular meeting after that.