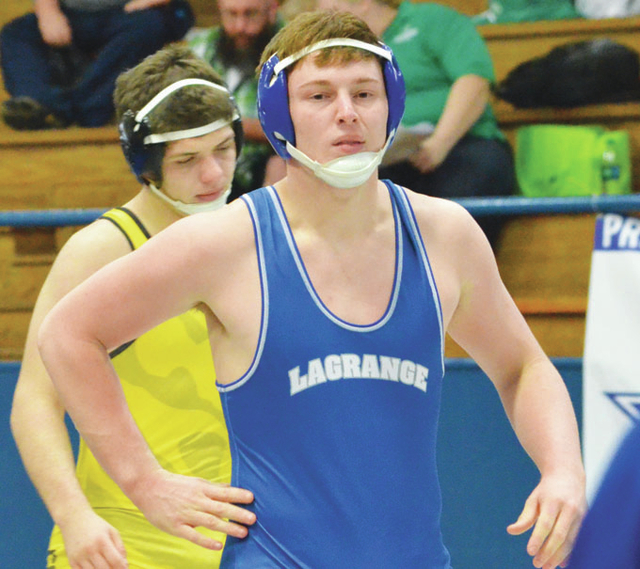 Jordan Ragan will be one of LaGrange’s 12 participants in the state sectional. Kevin Eckleberry | Daily News

http://lagrangenews.com/wp-content/uploads/sites/37/2016/02/web1_ragan.jpgJordan Ragan will be one of LaGrange’s 12 participants in the state sectional. Kevin Eckleberry | Daily News

LAGRANGE – It has all fallen into place.

Wegienka, who wrestles at 189 pounds, won an individual area title on Saturday, and that was his fourth tournament championship of the season.

Wegienka will be joined at the state sectional by 11 of his teammates, including fellow seniors Emmanuel Mann and Dakota Wilson, who each won area championships.

In each weight division at the state sectional, there will be 16 wrestlers, and the top eight finishers will advance to the state finals next week at the Infinite Energy Arena in Gwinnett County.

Wegienka made it to the state finals as a sophomore, but he came up short a year ago.

This year, he has the look of someone who can not only make it to the state finals, but can seriously threaten for a championship.

“Everything has come together,” Wegienka said. “I’ve gotten to that point where I have the strength where I can turn somebody, and the technicality to take on somebody that’s just as strong.”

Wegienka has won titles at the Chattahoochee River Wrestling Association tournament, the Hardaway Invitational, the Gary Silva Invitational and the area tournament.

Wegienka, who was an offensive lineman on the football team, said his commitment to fitness has made a big difference.

“When it comes down to the third period or overtime, it’s who has worked the hardest, who is the best condition,” Wegienka said. “It’s like in football. I was an under-sized lineman, so I had to be in better shape where I could oulast the defensive guys. I was still strong in the fourth quarter, and they were gassed. It’s the same way in wrestling.”

Mann, who wrestles at 285 pounds, has only lost one match this season, and he appears poised to make a strong run at state.

Last year, Mann was the only LaGrange wrestler that made it through to the state finals.

Mann said his strategy at the state sectional will be the same as it always is.

He’ll get the measure of his opponent, and then he’ll pounce.

“What I do, is I get the feeling of him, and then I know what I’m going to do,” Mann said.

In the area championship match, Mann won by pin early in the first period, giving him a third consecutive area title.

The Grangers’ other area title was won by Wilson, who began his season at Troup before transferring to LaGrange, and he has been a critical member of the lineup.

Watford had the lead late in his championship match, but he ended up losing by decision.

The good news for Watford is that that he had another match to prepare for after that heart-breaking loss.

“You learn from it,” Watford said. “It taught me to be smarter.”

Despite that loss, Watford heads to the state sectional with plenty of confidence.

He has had a big senior season, and his seeding position actually improved when the man he lost to at the area tournament had to pull out of the sectional because of an illness.

Watford wrestled at LaGrange High as a freshman and a sophomore before transferring to Northgate High as a junior.

Watford and his family returned to LaGrange for his senior season, and he couldn’t be any happier.

“It’s been amazing,” Watford said. “It’s like being back with my family. At Northgate, I went to practice, and then I went home. Here, we’re always hanging out, always talking.”

LaGrange’s Dijon Hart also made it to the championship match at the area tournament and finished second.

All the wrestlers who finished fourth or higher at the area meet advanced to the state sectional.