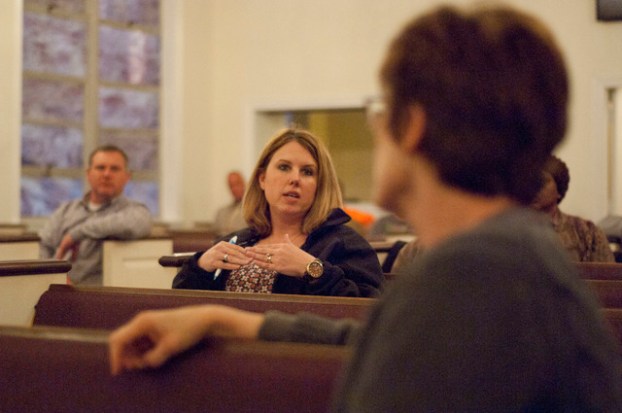 Rather, attendees of the third of four town halls — hosted by the antipoverty nonprofit Circles of Troup County at the Troup Baptist Association on Washington Street — were concerned about the people using the roads and alternative transportation options for low-income residents.

The mayor said the seven-person committee, comprised of community members and councilmen Dr. Tom Gore and LeGree McCamey, is looking at how lack of affordable transportation is “holding people back from health care, jobs” and other necessities, Thornton said.

“The task force is brain-storming ideas and looking at potential partners in the community,” Thornton said.

Because of LaGrange’s size — about 31,000 residents — the city does not pass the federal government threshold of about 50,000 people necessary to qualify for federal public transportation dollars, the mayor said.

He said other communities have tackled the same problems facing LaGrange by encouraging carpooling and in some cases expanding programs similar to Troup Transit, a county initiative that provides rides to medical and other appointments to seniors.

While the committee hasn’t yet made any formal proposals, Thornton said he hopes the committee will make suggestions for City Council to review by next year’s budget cycle.

The need for affordable, quality housing was also a topic of discussion.

Attendees brought up plans underway to reorganize and change the way the LaGrange Housing Authority oversees public housing. The mayor commented that he’s been in dialogue with LHA’s executive director, Zsa Zsa Heard, and told attendees plans to eventually raze the Benjamin Harvey Hill Apartment Homes on Whitesville Street are “under development, but have not crystallized.”

“We know that affordable housing is a need,” he said.

One topic not discussed at any of the other town hall meetings this year was raised by a member of Circles of Troup County. The woman asked about the city’s use of “the box,” a term that commonly refers to asking job applicants to check a box on employment applications if they are a convicted felon.

The mayor deferred to the city’s deputy city manager, Meg Kelsey, who said the city does ask that question, but it doesn’t necessarily disqualify a person from employment.

“Really, we just want to see if the person is going to be honest with us,” Kelsey said. City Council largely leaves the administration of city staff — including the hiring process — to the city manager’s office, the mayor noted.

For the third time in as many meetings, the subject of public safety was raised — particularly in the wake of a series of gang-related shootings that marked the first few months of 2015.

The mayor noted something that hadn’t been discussed in previous meetings. While people have expressed concerns about criminals, no one has complained about the police force. In reality, people have asked for more police officers, the mayor said.

The mayor’s final town hall meeting is slated for Thursday at 6 p.m. at Dunson United Methodist Church, 11 N. Barnard Ave. For more information, contact the city manager’s office at at 706-883-2010.

Contributed report This illustration shows an artist’s rendering of what the finished LaGrange College science building at Vernon Street and... read more