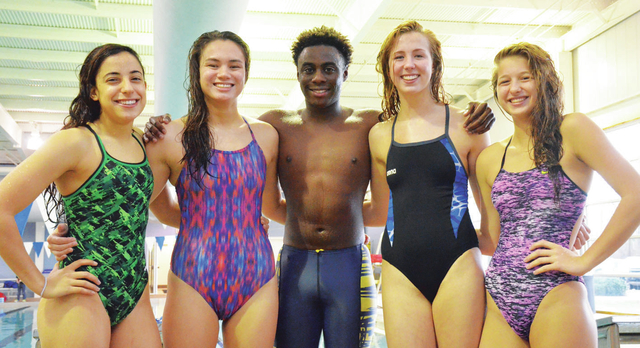 Camille Preston, Christine Yin, Andrew Ingram, Allie Paschal and Sydney Mauldin will compete in the preliminary rounds today, with the hope of advancing to the state finals on Saturday. Kevin Eckleberry | Daily News

http://lagrangenews.com/wp-content/uploads/sites/37/2016/02/web1_swimming2.jpgCamille Preston, Christine Yin, Andrew Ingram, Allie Paschal and Sydney Mauldin will compete in the preliminary rounds today, with the hope of advancing to the state finals on Saturday. Kevin Eckleberry | Daily News

Here’s the bad news for the opposition.

As competitive as Paschal was at the 2015 state meet, she said her times are “definitely faster than last year.”

Paschal will have four opportunities at the state meet to put that to the test as she competes in two individual events and two relays.

Three other talented LaGrange swimmers will also be at the state meet, including senior Christine Yin and sophomores Camille Preston and Sydney Mauldin.

Troup will be represented in the state meet by Andrew Ingram.

Paschal’s two individual events will be the 50-yard freestyle and the 100-yard backstroke.

In those same two events a year ago, Paschal finished fourth in the 100 backstroke, and she was fifth in the 50 freestyle.

For the past 18 months, Paschal has been competing for a swim team based in Auburn (Ala.), and she said that has made a big difference for her.

“I’ve been doing it for a year and a half now, and I’ve improved so much,” Paschal said. “Even last year (at state), I’d only been with them six months, and I’d already improved a lot. I’m looking forward to seeing what a year and a half has brought me. It’s a very elite team. It’s a lot of competition.”

In the 200-yard medley relay at the state meet, Paschal will swim the backstroke portion of the event, and she’ll be followed in the pool by Preston (breaststroke), Mauldin (butterfly) and Yin (freestyle).

Those same four swimmers will also compete in the 400-yard freestyle at state.

A year ago, Paschal, Preston, Mauldin and Yin were a part of the 200 medley relay team that finished 11th at state.

Paschal said the different strengths the four swimmers have is great for putting together a strong relay team.

“We all have a specialty stroke,” she said. “It all works well, especially in the medley. When we put all of our strokes together, it’s a very fast relay.”

Yin, who is set for her final competition as a high-school swimmer, had a 17th-place finish in the 100-yard freestyle last year, and she’ll be participating in that same event today.

Yin will also compete in the 100-yard backstroke.

The freestyle event is Yin’s specialty, and she’s hoping to build on the success she had last year.

“I made finals last year in the 100 free, and I’ve been having better times in season than I did last year, so I hope to make finals again,” Yin said.

As for the relay team, Yin said the four swimmers all complement each other.

“It helps that we’re good at different strokes,” she said. “Even on the freestyle relay, it makes you swim faster, because you’re depending on each other.”

Preston is confident both relay teams will perform well at state.

“I think our 200 medley relay team will definitely make finals, so hopefully we’ll have a chance of placing,” she said. “We really want to place. That’d be nice. Our 400 relay team, I think we’ll do good. I think we’ll make it to finals. It’ll be hard, but we can do it.”

“I am really looking forward to it,” she said. “I really feel like I can drop my times in my events. I’m excited.”

Mauldin said both relay teams “have a lot of potential” to do well at state.

“This season, we never really tapered for anything,” he said. “We have a good chance of going up there and competing.”

Mauldin said it has been an enjoyable season, in large part because of the number of swimmers the LaGrange team had.

“This season, it’s been more fun because the high-school team had a lot more swimmers,” she said. “It’s been a good season. Everybody had a good time. People just kind of came, and had a good time.”

For Ingram, this is familiar territory as well.

He has made multiple appearances in the state meet, and he’ll cap a successful high-school career this weekend.

Ingram began swimming in the eighth grade, and it soon became his primary sport.

“I went to a swim lesson program at LaGrange College,” Ingram said. “And I got out there, and I liked it, and I got better and better at it until it became my main competitive sport.”

Ingram will compete in one event at state, the 100-yard butterfly.

“I’m trying to beat my time from last year, and hopefully I can,” he said.