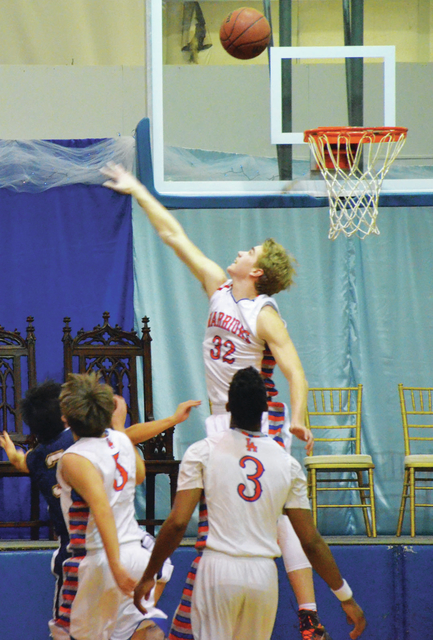 LaGrange Academy’s Lincoln Anderson gets to the basket during the first half of Friday’s win over Brandon Hall. Kevin Eckleberry | Daily News

http://lagrangenews.com/wp-content/uploads/sites/37/2016/02/web1_LGA2.jpgLaGrange Academy’s Lincoln Anderson gets to the basket during the first half of Friday’s win over Brandon Hall. Kevin Eckleberry | Daily News

LAGRANGE – The LaGrange Academy Warriors struggled a bit in the first half of Friday’s game against Brandon Hall, but they turned things up in the second half to make sure it was a happy homecoming night.

The Warriors, who trailed by eight points at the break, went on to claim a 58-43 victory in the GISA Region 4-AA game.

The Warriors have three games remaining in the regular season, and if they win at Solid Rock on Tuesday, they’ll be the number three seed for the region tournament.

In the first half of Friday’s game, the Warriors had a difficult time getting things going, and they were down 28-20 at the break.

The second half was a different story, with LaGrange Academy outscoring Brandon Hall 38-15 to win going away.

“We had a much better second half,” LaGrange Academy head coach Britt Gaylor said. “We played phenomenal defensively.”

Senior post player Whit Moreman led the Warriors with 16 points, all in the second half, and Lincoln Anderson added 14 points, and Will Trotter scored nine points.

“They played really well in the second half,” Gaylor said. “The second half, that’s what we can be. We played outstanding defensively, we shared the ball.”

In Friday’s girls’ game, it was Brandon Hall getting a 28-17 victory over LaGrange Academy.

Also on Friday, Troup High’s teams came up short in their regular-season finales at Carrollton.

Both Troup teams will compete in the Region 5-AAAA tournament next week.