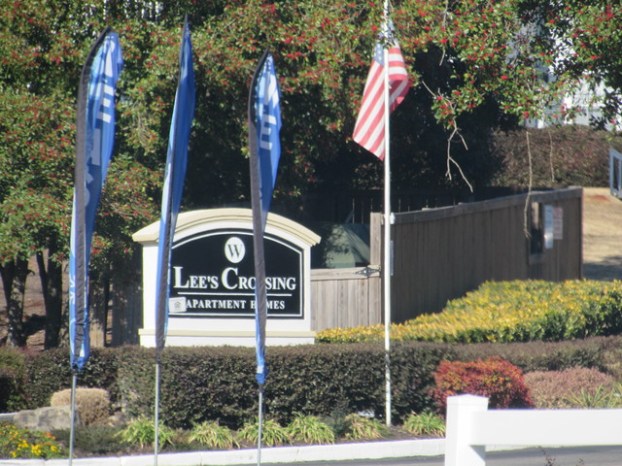 Three armed robberies have been reported within a week at the Lee’s Crossing Apartments located at 119 Old Airport Road. The company that manages the apartment complex said they have stepped up security measures and are working with police.

http://lagrangenews.com/wp-content/uploads/sites/37/2016/02/web1_Lee-sCrossing.jpgThree armed robberies have been reported within a week at the Lee’s Crossing Apartments located at 119 Old Airport Road. The company that manages the apartment complex said they have stepped up security measures and are working with police.

LaGRANGE — Residents at the Lee’s Crossing Apartment complex at 119 Old Airport Road are hoping for a quiet weekend after a string of armed robberies hit their normally quiet community this week.

The crimes have some folks looking over their shoulders at all times of the day and night.

” … While not a victim of the recent robberies, I definitely do not feel safe,” said one person who identified himself as a resident of the complex and wished to remain anonymous. “These robberies have been occurring during times of the day when people are out walking their dogs and getting home from work. There are even a bunch of children who are out riding their bikes from 4-6 p.m. throughout the week. It’s scary knowing that I could’ve have easily been a victim.”

Investigators with the LaGrange Police Department continue to work around the clock to solve the armed robberies and catch all the people involved in the crimes.

Officers arrested Demarcus J.Parks, 18, of LaGrange, about midnight Friday and charged him with armed robbery, aggravated assault and possession of a firearm during the commission of certain crimes. Investigators believe he is connected to an incident reported about 5 p.m. where six to seven men forced their way into an apartment and stole thousands of dollars worth of electronics and cash.

Strickland said detectives also issued warrants for the arrest of another suspect in the robbery, identified as Daniel Warren Harris, 24, who has prior addresses on Colquitt Street and in Alabama. He is described as 5-foot-6 and 140 pounds with tattoos on his arms, neck and face.

According to Strickland, there is evidence Parks and Harris are gang members.

The bold home invasion Thursday afternoon was the third reported robbery at the apartment complex since Sunday.

In both the prior incidents, the robbers approached a resident outside the apartments. In the Sunday incident, the victim yelled for someone to call 911, causing the robbers to flee. In the second incident, reported Wednesday, the robbers struck the victim with a gun and took his computer bag.

“There are some similarities between all three robberies,” he stated. “I would say that the first two are related based on the M.O. (method of operation) and the description of the suspects as provided by the victims. The M.O. for the apartment robbery is different in that the time is much earlier, the victims were not outside and there were six or seven suspects. The general description of the suspects are similar.”

“These were two very unusual events for Lee’s Crossing … not typical for this complex at all,” she stated. “We work closely with the LPD. We were already working with (an officer) about having neighborhood watches.

“Immediately we reached out to our property monitor and we reached out to LaGrange Police Sgt. Johnny Byrd and asked for additional patrols from the police department,” she added. “We also did additional checks on our outdoor lighting to make sure those are in proper working condition because we know it deters crime. We are very concerned …We are helping the police and will do what it takes to deter the crime and help catch the suspects.”

Millwood also said Lee’s Crossing has a “property monitor” who is a LaGrange police officer and lives on site.

She stated that once management was notified of the incidents, they informed residents of the robberies by placing a flyer on their apartment doors along with safety tips.

But for some, they feel it is too little, too late.

“I’ve decided to end my lease early because of these events,” one resident claimed. ” … This is three in one week. I left the hustle of the big city to get away from these kinds of things.”

Anyone with any information on the armed robberies was asked to contact the LaGrange Police Department at 706-883-2603 or Troup County Crime Stoppers at 706-812-1000. Police advised anyone who sees suspicious people loitering in the area to immediately call 911.