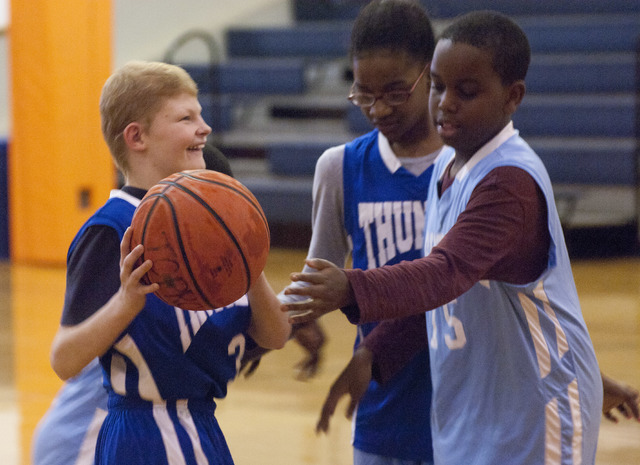 Special Olympian Matt Whatley prepares to pass a basketball to his teammate Thursday during a make-up game at the Mike Daniel Recreation Center on Lafayette Parkway.

http://lagrangenews.com/wp-content/uploads/sites/37/2016/02/web1_0204Basketball01-1.jpgSpecial Olympian Matt Whatley prepares to pass a basketball to his teammate Thursday during a make-up game at the Mike Daniel Recreation Center on Lafayette Parkway.

LaGRANGE — After ice and snow prevented a group of local Special Olympians from competing in Atlanta last month, this week they finally had their rematch.

A game of half-court basketball between the Thunder and Lightening teams and a round of skill demonstrations brought smiles — and ribbons — to contestants and families alike.

J.J. Kuerzi, a Troup County Parks and Recreation employee and local Special Olympics coordinator, planned the rematch to give the players a chance they might not have otherwise had.

“When it snowed in Atlanta, we were going to take the three-on-three teams up Friday, but the other teams canceled,” she said. “The skills (competitors) were going to leave Saturday, but we canceled for weather.”

Although the Thunder team trounced the Lightening 29-0, Mel Hilderbrand, Lightening’s coach and a special education assistant at Hollis Hand Elementary School, said she and her team enjoyed the game.

“This is our first year playing three-on-three,” said Hilderbrand, who has volunteered with Special Olympics for eight years. “Plus, we don’t feel so bad because they (Thunder) are middle schoolers and we’re elementary schoolers.”

Marilyn Sweet, another special education assistant at Hollis Hand, called Hilderbrand “one fine lady” for her work with the Special Olympics.

“She picks up both teams from school and brings them here every Thursday,” Sweet said of Hilderbrand. “Then afterwards, she takes them all out to eat.”

Hilderbrand said the Special Olympics — even a make up game locally — gives the contestants a chance to stand out.

“It’s a great opportunity for them to show off their skills and participate,” Hilderbrand said. “It’s really heartwarming to see them out on the court. I think a lot of people don’t realize the skills some of these players have.”