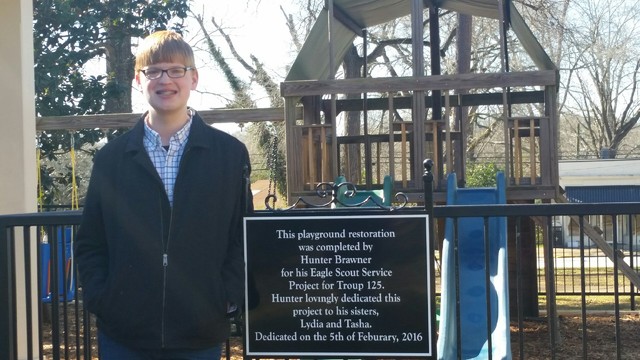 Hunter Brawner, 15, stands in front of the playground he rebuilt and refurbished for his project to earn rank as an Eagle Scout. The recreational area is part of Children’s Advocacy Center at the Coleman Center between Jackson Street and Forrest Avenue.

http://lagrangenews.com/wp-content/uploads/sites/37/2016/02/web1_20160205_143134.jpegHunter Brawner, 15, stands in front of the playground he rebuilt and refurbished for his project to earn rank as an Eagle Scout. The recreational area is part of Children’s Advocacy Center at the Coleman Center between Jackson Street and Forrest Avenue.

Brawner stands next to a plaque noting his restoration of the playground. The restored area was unveiled in a special dedication ceremony Friday in front of Twin Cedars staff, his family, and city and county leaders.

http://lagrangenews.com/wp-content/uploads/sites/37/2016/02/web1_20160205_143322.jpegBrawner stands next to a plaque noting his restoration of the playground. The restored area was unveiled in a special dedication ceremony Friday in front of Twin Cedars staff, his family, and city and county leaders.

LaGRANGE — When Hunter Brawner, 15, took a look at the playground at the Coleman Center at the corner of Dallis and Lincoln streets and Forrest Avenue last July, he saw a lot of potential — and a lot of work.

The playground had recently been vandalized. Someone slashed the tarp on top of the fort, kicked out the rails that exposed rusty nails, broke the swings, bashed in the vents in the gazebo and spray painted graffiti on the columns of the gazebo

Vandals also stole the table from under the gazebo, ripped up plants and flowers in the garden, kicked in pumpkins and smashed one of the outdoor surveillance cameras.

The playground is part of the Twin Cedars Children’s Advocacy Center. The facility helps children who may have been sexually abused.

Brawner was not deterred by the amount of damage he saw that day in July. Instead, the Boy Scout from Troop 125 became more determined to make it his master project to obtain the rank of Eagle Scout and create a safe place for children to play.

On Friday, the teen unveiled the revamped recreation area and presented his project to Twin Cedars staff, members of the community, plus city and county leaders.

“I was really glad with how it turned out,” said Brawner. “I was glad for the community support. When I look at how it was when I started — fairly dismal — to now, I’m really proud of it.”

After looking at the site in July, the teen wrote a proposal on how he planned to convert the playground then solicited help from folks in the community to try and bring his vision together.

In January, Brawner, with the help of friends, spent one full day shoveling mulch, installed two new wheelchair accessible full support swings, replaced the tire swing with a glider, pressure washed the gazebo and all the equipment, repainted the gazebo and installed new vents, added a new tarp to the fort, replaced the ceiling fan in the gazebo, plus added a new picnic table, large porch swing and new surveillance cameras.

The teen said the project started off with just replacing the picnic table and swing, but quickly grew from there.

Brawner estimated the entire project cost more than $10,000 and every single cent was donated from small businesses in the community. The teen explained that none of the money for the Eagle Scout project can come from the members themselves, nor from their families.

He said all the hard work was worth it.

“The work day was probably the best day, which I never could have predicted that,” Brawner stated. “The moment we were shoveling mulch, it went beyond the visionary scope of things and I could truly see how this playground would impact people.”

Samantha Link, public relations and marketing representative with Twin Cedars, added: “Its not just kids at the Advocacy Center that use the playground, but all the children in the community come in and play here.”

Brawner said he hoped the playground brings some joy to children going through a difficult time — at least for a little while.

“If they’re at the Coleman Center, it may be for a bad experience. But maybe playing on the playground will soften that experience,” the teen explained. “I know it’s not a miracle, but even if it is just a temporary patch on something painful, then I think I’ve made a huge impact.”