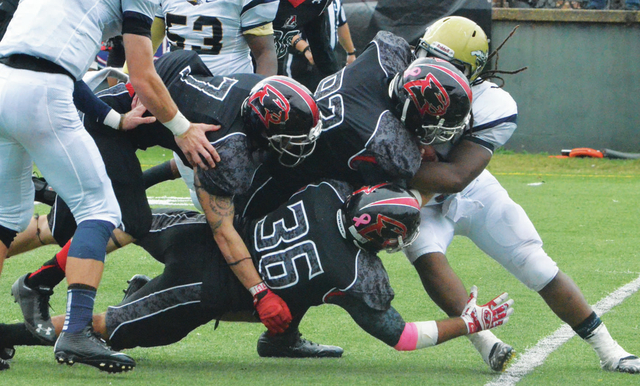 LaGrange College’s Mark Wagner drives to the basket during the second half of Sunday’s 105-103 win over William Peace in overtime. Kevin Eckleberry | Daily News

http://lagrangenews.com/wp-content/uploads/sites/37/2016/02/web1_LC1.jpgLaGrange College’s Mark Wagner drives to the basket during the second half of Sunday’s 105-103 win over William Peace in overtime. Kevin Eckleberry | Daily News

LAGRANGE – With Justyn Olson providing the buzzer-beating heroics, the LaGrange College Panthers walked away with a thrilling 105-103 home victory over William Peace on Sunday afternoon.

The game was tied when LaGrange College’s Mark Wagner attempted a 3-pointer that missed, and it was Olson coming up with the rebound.

Olson’s putback as time expired ended the suspense and gave the Panthers the USA South win.

The Panthers (15-6 overall) improved to 6-4 in conference play, and they bounced back from Saturday’s 114-98 home loss to North Carolina Wesleyan.

In the second overtime of Sunday’s game, the Panthers inbounded the ball after a timeout, and Tyler Langston drove to the basket.

Langston passed the ball out to Wagner, who got the shot away.

It missed, and Olson came up with the ball and scored, and the celebration was on.

“Mark missed it, but all those guys were coming out, trying to stop the best shooter on the court,” Olson said. “That just left everything wide open. I just happened to be the one that got the ball. We all wanted it. We had hands all over the ball.”

In a game where there was a lot that went wrong, the Panthers found a way.

“We battled,” Olson said. “We went through adversity. We could have folded, and we didn’t do that. It was an awesome game.”

The Panthers had the lead late in regulation and in the first overtime, but the Pacers fought back both times to tie it.

At the end of regulation, Terry Rogers made a 3-pointer to tie it, and it was Kori Anderson scoring with 17 seconds left in the first overtime to pull his team even.

In the second overtime, the Pacers had the lead until Alex Bonner scored with 1:04 to tie it at 103-103, and that’s the way it remained until Olson’s game winner.

“Our kids battled hard the entire game,” LaGrange College coach Kendal Wallace said. “We’ve talked extensively about getting tougher and finishing games. Today, we did that. I was a little disappointed in us losing the lead and having to go to OT twice, but was proud of how we stayed focused.”

Bonner, making his first start of the season, had a big game for the Panthers with 23 points and 10 rebounds,and he scored 12 points in the two overtime periods.

“Alex is a staple in our program,” Wallace said. “He is always ready whether a starter or coming off the bench. He’s a gamer and always shows up at crunch time, and is one of our toughest players.”

Olson also did his part with 22 points, eight rebounds and five steals.

Drew Vanderbrook came off the bench and scored 17 points, and Wagner had 16 points while making four 3-pointers, and he grabbed eight rebounds and had three steals.

With Wagner hitting an off-balance 3-pointer at the halftime buzzer, the Panthers had a 44-35 lead, and they were up by 13 points with a little more than four minutes remaining in regulation.

After getting within three, Rogers nailed a 3-pointer as the clock hit zero, and it was on to overtime.

In the first overtime, the Pacers trailed 95-93 lead when Anderson made a layup to tie things up, and after the Panthers missed at the buzzer, it was on to another extra period.

The Panthers got the ball for the final time with 34 seconds left when Jacob Gaetanos came up with a defensive rebound, setting up the last-second fireworks.

The win allowed the Panthers to avoid dropping two straight games at home over the weekend.

On Saturday, LaGrange College gave up 65 points in the second half and lost 114-98.

The Panthers had lost three of four games overall heading into Sunday’s game, but Olson said no one was worried.

“We have a tough conference, and everybody in our conference is very solid,” Olson said. “We just have to play our best by the time the tournament rolls around. If we can do that, we’ll be all right.”

The Panthers have four regular-season games remaining, all against USA South foes.

LaGrange College hosts Covenant on Friday and Maryville on Saturday, and it closes the regular season with road games against Huntingdon and Piedmont.

The Panthers will then try to win a third consecutive conference tournament championship.