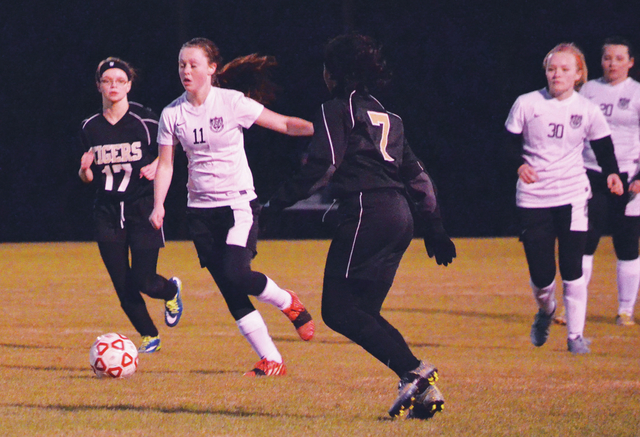 The Callaway Cavaliers got their season off to a nice start with a 3-1 victory over Temple on Monday. Kevin Eckleberry | Daily News

http://lagrangenews.com/wp-content/uploads/sites/37/2016/02/web1_soccer1-1.jpgThe Callaway Cavaliers got their season off to a nice start with a 3-1 victory over Temple on Monday. Kevin Eckleberry | Daily News

HOGANSVILLE – They were getting plenty of good looks at the net, but as the Callaway Cavaliers headed to the halftime break of Monday’s season opener against visiting Temple, they were staring at a 1-0 deficit.

The second half was a different story.

The Cavaliers scored three goals in the second half, and that was enough to claim a 3-1 victory in their regular-season debut.

“We’re slow starters, but once we got over that little hump of the first goal, we finally dominated,” Callaway head coach Jake Hembree said.

It was a scoreless game when Temple scored with four minutes left in the first half, and it had a 1-0 lead at the break.

The Cavaliers tied it six minutes into the second half, and they notched the go-ahead goal 13 minutes later.

Noah Hill scored the first goal on an assist from Cameron Spinks.

On the second goal, Hill passed the ball to Greyson Lambert, who headed the ball into the net.

“That was a textbook goal, just beautiful,” Hembree said.

Jonathan Castillo provided an insurance goal for Callaway with a successful penalty kick late in the game.

Callaway took 35 shots in the game, and two of them found the net.

“We’ve made a lot of improvements since last Thursday,” Hembree said, referring to the preseason game against Pacelli.

In Monday’s girls’ game, the Lady Cavaliers got their season off to a fast start with a convincing 6-0 victory.

Callaway’s teams will be back home on Thursday to play Manchester.

In the girls’ game, the Lady Cavaliers had no trouble kicking off their season with a win.

Head coach Kristen Clonts said “the girls played great last night. They were competitive and gave 110 percent until the end.”

Callaway’s teams will be back home on Thursday to play Manchester.