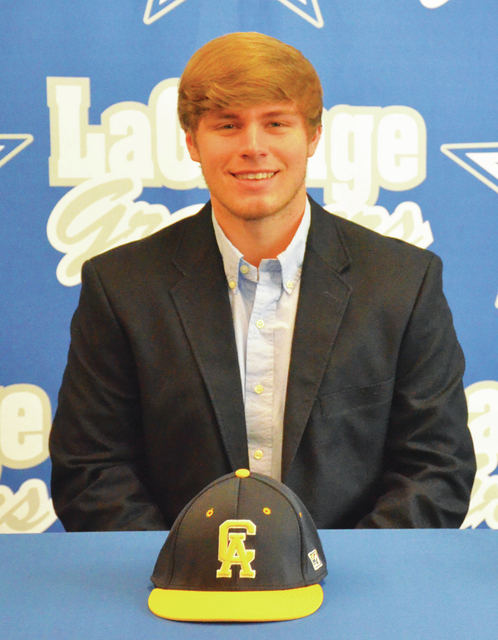 LaGrange’s Jake Howard and Larkin Easterwood were joined by their teammates during a signing-day ceremony on Tuesday. Howard is going to North Georgia, and Easterwood has signed with Central Alabama. Kevin Eckleberry | Daily News

http://lagrangenews.com/wp-content/uploads/sites/37/2016/02/web1_signing9.jpgLaGrange’s Jake Howard and Larkin Easterwood were joined by their teammates during a signing-day ceremony on Tuesday. Howard is going to North Georgia, and Easterwood has signed with Central Alabama. Kevin Eckleberry | Daily News

Jake Howard, who has played multiple positions during his time at LaGrange High, has signed a letter of intent with The University of North Georgia. Kevin Eckleberry | Daily News

http://lagrangenews.com/wp-content/uploads/sites/37/2016/02/web1_signing1.jpgJake Howard, who has played multiple positions during his time at LaGrange High, has signed a letter of intent with The University of North Georgia. Kevin Eckleberry | Daily News

LAGRANGE – They’ve succeeded as baseball players on every level so far, and LaGrange High’s Jake Howard and Larkin Easterwood are looking forward to embracing the next challenge.

Howard and Easterwood, who will be two of the top players on LaGrange’s team this spring, have both signed letters of intent to play college baseball.

Howard has signed with the University of North Georgia, while Easterwood is heading across the state line to play for Central Alabama Community College.

Both men made their announcements during a signing-day ceremony on Tuesday in the LaGrange High media center.

Howard, who has been an infielder, catcher and pitcher during his time at LaGrange, said “playing college baseball is something I’ve always wanted to do. I’m really excited to get up there and play.”

Easterwood, who’ll be LaGrange’s catcher this spring, has been a part of plenty of signing days before as a participant, but Tuesday was obviously a lot different.

“Over the years, underclassmen come in here and look up to everybody that’s been signing,” Easterwood said. “Now I’m the one up here. I’ve accomplished what I’ve wanted to do.”

There is, naturally, plenty the two still want to accomplish as high-school players.

Howard and Easterwood will be on the field today when LaGrange visits Callaway for a preseason game, and the regular season gets under way next week against Spalding County.

“This is my last year of high-school baseball, and we have the potential to be a really good team,” Howard said. “I’m excited for what we could do this year.”

David Smart, LaGrange’s first-year head coach, is happy to have Howard and Easterwood around for one more season.

“I’m really excited for the spring for them, and what they’ll do for our program before they do take off to go play for their respective institutions,” Smart said.

Easterwood will be behind the plate for most of LaGrange’s games this season, and Smart said he is poised for a big season.

“Larkin can really hit,” Smart said. “He swings the bat really well. He’s done a really good job over the past few months of really developing his catching skills. We’re looking for him to be really good back there for us.”

As for Howard, he’ll be a starting infielder, but he’ll also pitch, and he could even end up at catcher on occasion to spell Easterwood.

Smart said Howard’s ability to do so much on a baseball field was one of the appealing things to North Georgia coach Tom Cantrell.

“He can pitch, can play middle infield, he can be a catcher for you,” Smart said. “From talking to coach Cantrell, he’ll serve that role for them. That’s one of his biggest assets is his versatility.”

Howard said he’ll be willing to take on whatever role is required of him at North Georgia.

Howard said he’s looking forward to playing for Cantrell, and taking advantage of the new facilities at the school.

“Coach Cantrell is a great guy,” Howard said. “I like the way he coaches. He’s kind of like coach Smart in a lot of ways. And it’s an all-turf baseball field. I loved that. It’s all brand new. And they’ve got a new clubhouse. And they’ve got a good program. They’re winning, which was important.”

Easterwood said he had plenty of help in choosing a college, with Smart as well as Shannon Snyder of the Game On organization lending a hand.

“I had help from coach Shannon and coach Smart,” he said. “I talked to them multiple times to see what was best for me, see what was the best fit for me. “

At the end of the process, Easterwood said “I just picked what was best for me and my family.”

Easterwood has made tremendous strides as a player over the years, and he said it all comes down to just putting in the work.

OF NOTE: For more signing photos, go to facebook.comLDNsports