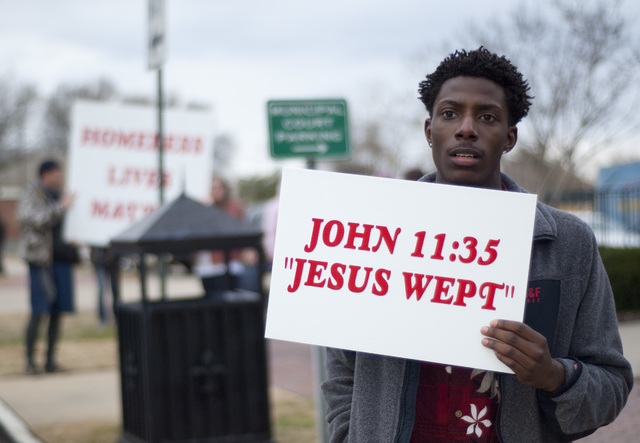 Council member Mark Mitchell listens to a supporter of Emmaus Shelter during a meeting Tuesday.

http://lagrangenews.com/wp-content/uploads/sites/37/2016/02/web1_Homeless03.jpgCouncil member Mark Mitchell listens to a supporter of Emmaus Shelter during a meeting Tuesday.

A temporary warming center is set up at ThreeLife Church on Hogansville Road on Tuesday.

http://lagrangenews.com/wp-content/uploads/sites/37/2016/02/web1_Homeless04.jpgA temporary warming center is set up at ThreeLife Church on Hogansville Road on Tuesday.

Lucas Stepherson, 25, and Robert Darbonne, 23, play video games at a temporary warming center set up at ThreeLife Church on Hogansville Road on Tuesday.

http://lagrangenews.com/wp-content/uploads/sites/37/2016/02/web1_Homeless05.jpgLucas Stepherson, 25, and Robert Darbonne, 23, play video games at a temporary warming center set up at ThreeLife Church on Hogansville Road on Tuesday.

Volunteers from ThreeLife Church on Hogansville Road talk while serving at a temporary warming center Tuesday.

http://lagrangenews.com/wp-content/uploads/sites/37/2016/02/web1_Homeless06.jpgVolunteers from ThreeLife Church on Hogansville Road talk while serving at a temporary warming center Tuesday.

Jeffrey Simmons, 18, stands outside a City Council meeting Tuesday as he protests a city decision made last month to close a warming center for the homeless. Officials closed the temporary center, which was operated by a Emmaus Shelter in the former Dawson Street School, after allegedly discovering safety and conditional use violations.

http://lagrangenews.com/wp-content/uploads/sites/37/2016/02/web1_Homeless01.jpgJeffrey Simmons, 18, stands outside a City Council meeting Tuesday as he protests a city decision made last month to close a warming center for the homeless. Officials closed the temporary center, which was operated by a Emmaus Shelter in the former Dawson Street School, after allegedly discovering safety and conditional use violations.

LaGRANGE — A crowd of protesters lined Ridley Avenue on Tuesday as the mayor and City Council arrived for what they knew would be a contentious meeting.

After city officials decided last month to pull the plug on a temporary warming center for the homeless, the group of about 40 people hoped to persuade council to approve a permit to allow Emmaus Shelter to run overnight housing at their headquarters at 321 Greenville St.

Emmaus, by the admission of its director, Jessica David, has already been housing people overnight on Greenville Street for more than a year without the necessary permit.

Council unanimously voted to deny the permit request after about an hour of public input from supporters and opponents. Council also united to pass a motion introduced by council member Norma Tucker that gives Emmaus 30 days to comply and cease overnight sheltering.

“We’re all 45 days from being homeless,” David said before the vote. “Everybody (at Emmaus) earns their bed every day … this is not a detriment to the neighborhood. … We’re trying to do our best to fill a gap in the circle of care here and be part of a solution to help our community be strong.”

Mack Reynolds, an attorney from Hogansville who owns commercial rental property next door to Emmaus, told council a former tenant of five years ended a lease in October after complaining to him about problems with Emmaus. He hasn’t been able to find anyone to fill the space since, he said.

“I am personally concerned about the destruction of my property value,” Reynolds said. “It’s my observation just from looking around that it’s just naturally going to pull property values down. If that center is allowed to come in there, it’s going to be a destination point for homeless people.”

‘Attracting folks from all over’

In the back channels of city hall, administrators say they’re concerned that Emmaus could become the end of the line for homeless people across the region.

“Word has gotten out through the underground that there’s a shelter here, and it’s attracting folks from all over,” one city official said on background. “We’re just not equipped to absorb that.”

Addressing council on Tuesday, David said Emmaus is the only shelter between Atlanta, Columbus, Griffin and Montgomery. The shelter’s numbers have grown steadily in recent years, she said, today serving between 40 and 60 people per day at Emmaus’ headquarters on Greenville Street and other locations around LaGrange.

The city has generally been supportive of Emmaus. Since 2011, it’s donated money and this year opened up a city-owned building for a warming center in cold weather. Mayor Jim Thornton, a real estate attorney by trade, noted during council’s meeting that he’s offered pro bono work handling the legal paperwork necessary to transfer real properties donated to Emmaus and has personally supported its fundraisers.

On top of that, the LaGrange Police Department, under the direction of Public Safety Chief Lou Dekmar, established a task force some years ago to tackle homelessness. That task force evolved into the Troup County Homeless Coalition, which meets monthly at LPD headquarters on Haralson Street.

The city-run utilities department also works with people to find cost-effective payment plans and deposits that fit the budgets of people struggling to get back on their feet.

Tucker, along with other Council members, said she supports Emmaus’ efforts, and that “we’ve all got to work together to address this problem — but there are policies that have to be followed.”

Council member Mark Mitchell asked David what percentage of the people served by Emmaus are from Troup County, to which she responded “95 percent,” and that the shelter tries to move people out within 30 days.

In December, the city offered up a surplus school building to act as a temporary warming shelter in cold weather. The Dawson Street School on North Dawson Street was built in 1950.

Today, the building sits abandoned and time has taken its toll. Part of the roof has collapsed and the smell of mold fills the basement. Still, David said Tuesday, it was better than people being out in the cold.

City staff agreed to allow Emmaus to set up a warming center under certain conditions: no more than 40 people could be housed in a single room designated for use, no cooking, hot plates or open flames were allowed and everyone had to be out by 9 a.m. each day.

Things went smoothly until the LaGrange Fire Department was called to the warming center for a medical emergency and found people in the auditorium, according to Fire Marshall John Thomas. On top of that, city officials found food being prepared and extension cords they said posing tripping hazards.

Because the building is listed in the fire department’s rolls as vacant, firefighters might not know to go in to search for people if a fire broke out. If they did go in and people weren’t where they were supposed to be, firefighters’ lives could be at risk, Thomas said.

Ultimately city staff made the decision to shutter the warming center. The decision wasn’t made lightly, said Alton West, the city’s community development director, but was made because of safety concerns.

The chapter tells the story of Jesus meeting the relatives of a man named Lazarus, whom the Bible says Jesus raised from the dead after being so moved by Lazarus’ family’s grief.

During Council’s meeting, many supporters of the shelter referenced their faith and convictions to help the homeless, noting they felt called to do so.

Troup County Commissioner Tripp Foster, who spoke in support of the shelter, read a verse from the Gospel of Matthew urging council to support the permit it later denied.

Bobbie Hart, another Emmaus supporter, urged not only council but the faith community to be more involved in finding a solution for homelessness in Troup County.

“We’ve got to have a homeless shelter,” Hart said. “I’m asking for more help from our faith-based community.”

One church did step up Tuesday night.

Stacks of pepperoni pizza and baked goods lined folding tables not far from military-style cots set up and covered in blankets and quilts.

Sitting on one of those cots, 23-year-old Robert Darbonne of Mississippi said he would have been on the streets had the shelter not been set up.

Darbonne said he made his way from Atlanta to Mississippi on a Greyhound bus not long ago and later hitchhiked to Hogansville. On Sunday, he said he went to a church there where a pastor put him in touch with Emmaus.

Other homeless men being sheltered at the church had similar stories. One man said he came from Ohio and had been at Emmaus off and on for about a year. He said he wound up at Emmaus after he was living at a park on West Point Lake and a ranger put him in touch with Emmaus. Another man said he found out about the shelter on the Internet.

When Council member Nick Woodson asked David on Tuesday what her “plan B” would be if council denied her request for a permit to house people overnight on Greenville Street, David didn’t seem to know.

Emmaus can re-apply for the permit, but future passage seems unlikely. Foster said he would call the county manager today and see if the county’s recreation department facilities could be used as temporary shelters.

Still, there is a sense of what many people Tuesday referred to as “not in my back yard.”