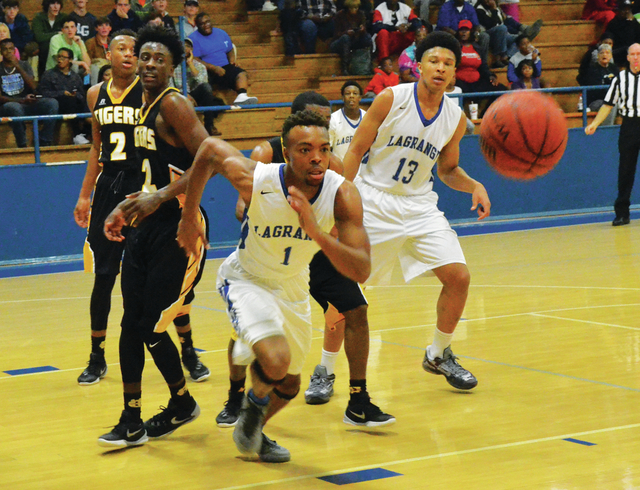 LaGrange’s Chnairiea Strozker goes to the basket during the first half. Kevin Eckleberry | Daily News

COLUMBUS – They just couldn’t get over the hump.

The LaGrange Lady Grangers kept things tight throughout the fourth quarter of Tuesday’s Region 1-AAAAA tournament game against Harris County, getting as close as two points, but they were unable to pull even or take the lead.

In the end, it was Harris County holding on for a 47-40 victory in the first-round game that was played at Northside High.

While Harris County advances to the semifinals and earns a spot in the state tournament, the season has come to an end for LaGrange.

Jessika Carter led Harris County with 15 points, and she had 12 of those points in the second half.

The Lady Grangers started quickly, surging to an 11-6 after the first period, but they went cold in the second quarter, and it was the Lady Tigers taking a 17-13 lead at the half.

Dozier’s basket with 2:20 left in the half accounted for LaGrange’s only points in the second period.

Harris County then scored the first six points of the third quarter to extend its lead to 10 before LaGrange regained its footing and climbed back into the game.

LaGrange forced back-to-back turnovers that led to baskets by Dozier and Strozier, and Harris County’s lead was 23-18 with 2:40 left in the third quarter.

The Lady Grangers got as close as four on a pair of Woodard free throws, and the Lady Tigers had a 29-23 lead as the fourth quarter began.

Strozier hit a couple of quick baskets in the first minute of the fourth quarter, and the Lady Grangers were within two with plenty of time remaining.

LaGrange continued to hang around the rest of the way.

After Harris County went up by six, LaGrange pulled to within two once again on a basket by Dozier with 4:56 remaining.

Harris County answered with a 6-0 run to build the lead to eight, and Woodard converted a three-point with 2:35 to play to get LaGrange within five.

That’s as close as the Lady Grangers would come the rest of the way, though.